La Vigilia and Other Christmas Traditions

By Giovanni di Napoli
Like many Duesiciliano Americans, my family keeps the tradition of La Vigilia di Natale, the southern Italian ritual of eating seafood and eschewing meat on Christmas Eve. Despite regular and varied claims to authenticity, I believe the so-called Festa dei sette pesci, or the Feast of the Seven Fishes, is a recent fabrication. Though more lavish then in the past, according to our matriarchs there were never a set number of dishes served. We simply ate what we could afford, and what was fresh and available. 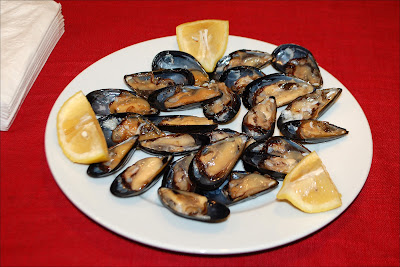 Today, we normally have shrimp, calamari (squid), clams, mussels and scungilli (whelk), which all can be prepared in a variety of ways. Capitone fritto alla napoletana (fried eel) use to be the main course, but nowadays—since the passing of my grandparents—we sometimes have aragosta (lobster), ricci di mare (sea urchin) or baccalà (salt cod).
As always, the ladies outdid themselves and treated us to another memorable dinner.
Following the fish bonanza was another southern Italian specialty: panzerotti, delicious deep fried crescent-shaped dough filled with mozzarella and tomato; ricotta; or onions and capers.
Next came fruit, roasted chestnuts, caffè and an assortment of delicious sweets, including Pasticciotti Leccesi and struffoli, the quintessential Neapolitan Christmas dessert that will satisfy the most stubborn sweet tooth. There is no panettone in my house.
The vigil, of course, is not just about food, it's also about family and faith.
After dinner we played games (tombola) with the kids and attended Midnight Mass in Dyker Heights, Brooklyn. Afterward, we walked through the neighborhood to see the spectacular Christmas decorations. My family has been doing this for as long as I can remember, though originally it was in East New York, Brooklyn, where my maternal grand- and great-grandparents were from.
Christmas morning we exchanged presents, made the rounds and visited family and friends until dinnertime. No less extravagant than the Eve, Christmas dinner was a culinary tour de force with plenty of hot and cold antipasti, insalata, pizza, baked manicotti and a American-style Christmas ham. Fruit, dessert and caffè complete the meal.
Not quite finished yet, December 26th is Saint Stephen's Day. In honor of the Feast of Santo Stefano, the first martyr (and my saintly Confirmation namesake), we usually celebrate with torrone, a sticky nougat candy made from honey, nuts and egg whites that dates back to Roman times. I like mine with a glass of Strega or Amaro. Buon Natale!
Amended 2017

December 27th is the Feast Day of San Giovanni the Apostle and evangelist, patron saint of writers and theologians. Widely venerated across southern Italy, he is the principal patron of San Giovanni la Punta (CT), Mariglianella (NA), Teverola (CE), Ailano (CE), Motta San Giovanni (RC), Castellalto (TE), and Paterno (PZ), among others. To commemorate the occasion I'm posting a prayer in his honor. The accompanying photo of San Giovanni was taken at the Basilica Santa Trofimena in Minori.
A Prayer to St. John the Evangelist
O Glorious St. John, you were so loved by Jesus that you merited to rest your head upon his breast, and to be left in his place as son to Mary. Obtain for us an ardent love for Jesus and Mary. Let me be united with them now on earth and forever after in heaven. Amen

Labels: Prayer, Saint of the Day, Seasons and Holidays

Photo of the Week: The Presepio at the Chiesa dello Santo Spirito dei Napoletani in Rome

By Cav. John Napoli
Meeting every third Tuesday of the month (@7:30pm) at the Basilica of St. Patrick’s Old Cathedral parish house (263 Mulberry Street), a group of resolute volunteers prepare and distribute food to the homeless. Led by Dama Francesca Tempesta, we make our way around the Bowery, in Manhattan's Lower East Side, and hand out some 50 care packages with ready-to-eat food (sandwiches, fruit, etc.) and toiletries (toothbrushes, mouthwash, etc.). Knit hats and scarves are included during the cold winter months.
Anyone interested in supporting this noble endeavor can contact the Order of Malta Auxiliary at nycaux@orderofmaltaamerican.org or call 917-566-3937. For additional information, the Order can be found on Facebook at facebook.com/maltaauxiliarynyc.

God Bless Francesca, the Order of Malta Auxiliary, and Msgr. Donald Sakano, Pastor of Old St. Pat's, for organizing the monthly walk; their hard work and generosity are truly inspiring. I am deeply honored to serve with such an outstanding group of people and committed to do my part and contribute in any way I can to this worthy cause.

If you’re planning to visit the spectacular Dyker Lights Christmas light displays in Dyker Heights, Brooklyn, be sure to stop by John Miniero’s house on 14th Avenue, between 79th and 80th Streets, to see his wondrous annual outdoor prespio. The Neapolitan Christmas tradition has been a neighborhood favorite for many years and continues to amaze onlookers with its whimsy and complexity. 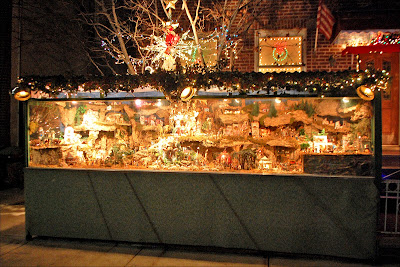 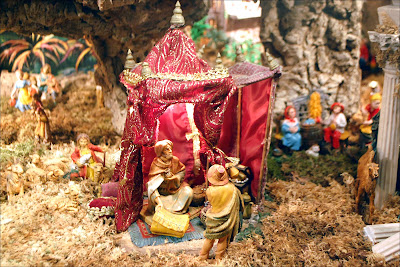 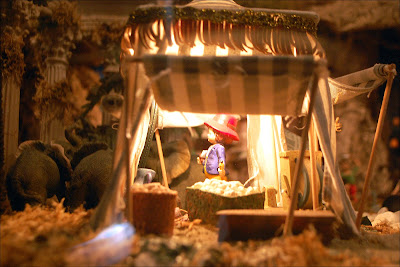 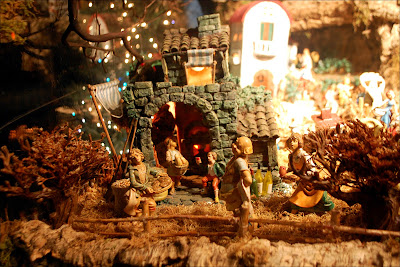 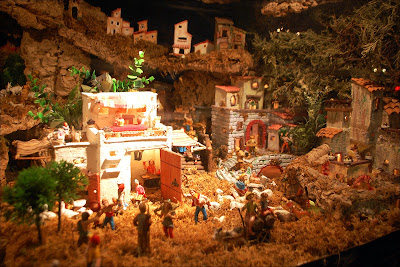 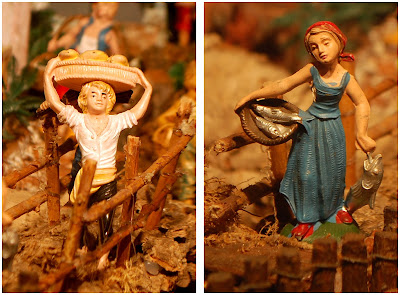 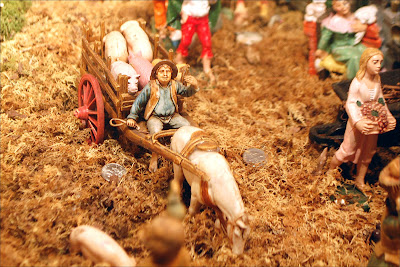 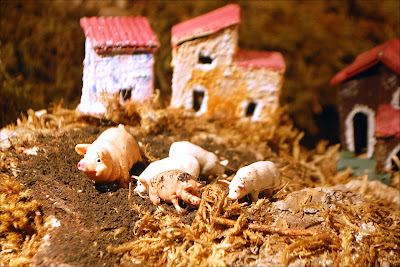 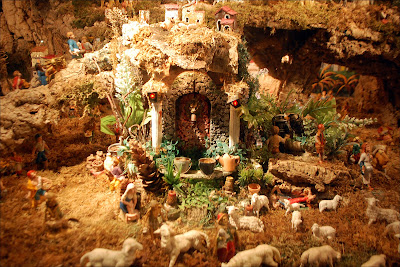 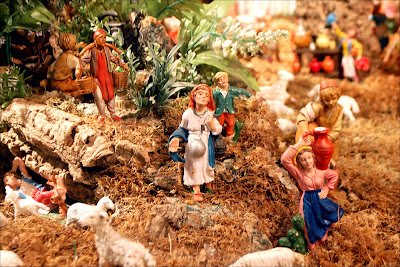 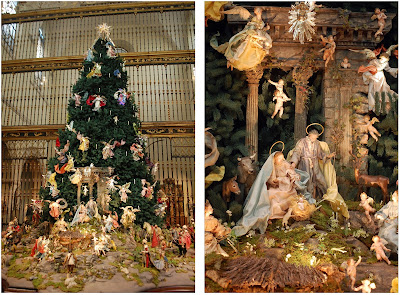 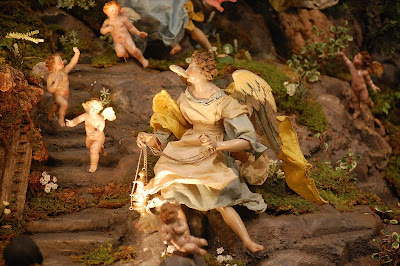 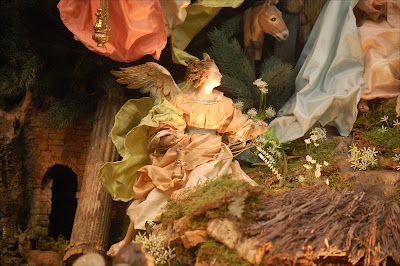 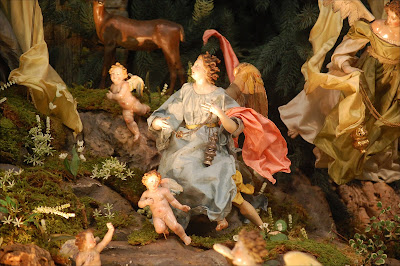 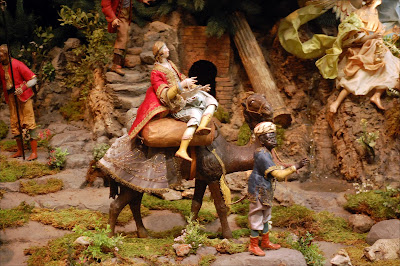 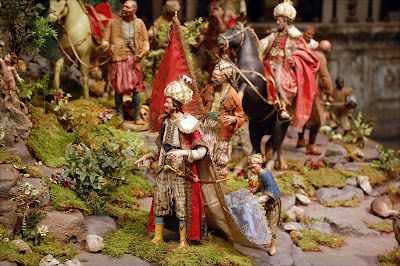 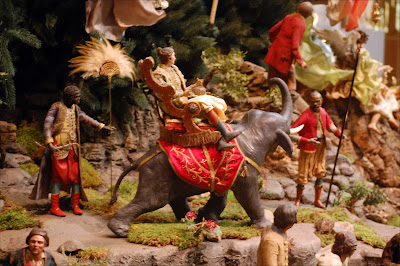 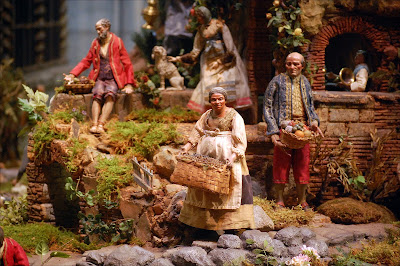 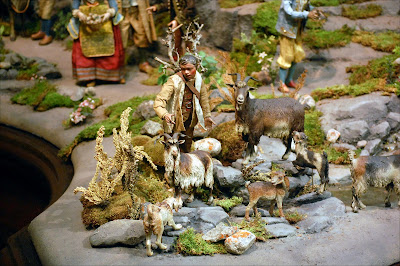 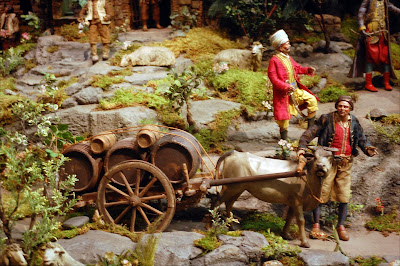 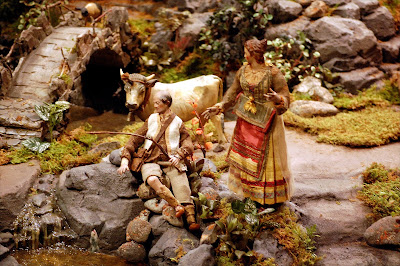 Celebrating the Feast of the Immaculate Conception at Ornella Trattoria in Astoria, Queens

We temporarily broke our Advent fast Friday night for the Feast of the Immaculate Conception at Ornella Trattoria (29-17 23rd Avenue) in Astoria, Queens. We’ve been hearing good things about the neighborhood hotspot for awhile now, so we finally took the long overdue trip to see for ourselves what all the excitement was about. I’m glad we did, because Ornella did not disappoint.
Dropping the car off with the valet, we made our way in from the cold and were warmly greeted by owner and executive chef Giuseppe Viterale. Intimate and cozy, the narrow restaurant made it feel almost like we were at a casual dinner party in a friends dining room.
Quickly seated, our party put in our drink orders and perused the wide-ranging selection of southern Italian and Italian American delicacies on the menu. Unsure what to order, we deffered to Giuseppe and let him choose our meal for us. From there, his attentive and friendly sons, Angelo and Giovanni, kept bringing out the food.
Our feast began with the affettati e formaggio, a wood cutting board generously covered with thinly sliced artisanal salumi, imported Manchego cheese, and assorted olives. The platter was served with bread and three tasty homemade preserves, including a sweet caramelized onion spread, an old-fashion raspberry marmalade, and, my personal favorite, a spicy diavulillu jam.
Perfectly paired with a heaping serving of gamberi con fagioli cannellini (broiled shrimp with cannellini beans cooked with garlic and rosemary) and a creamy burrata over a mound of sautéed mushrooms and onions, the plates were continuously passed to and fro so everyone could enjoy seconds and thirds.
The antipasti was soon followed by two mouthwatering fresh pasta (pasta fresca) dishes.
First we had Giuseppe’s signature Pasta di Castagna, a rustic pizzoccheri made with chestnut flour and smothered in a creamy pistachio sauce. A drizzle of truffle oil added an earthy nuance to the dish. Then came a savory cuttlefish-ink spaghettoni with black garlic and anchovies, topped with toasted bread crumbs. Both culinary masterpieces were distinct and delicious.
Unfamiliar with black garlic, Giuseppe brought out a few cloves for us to try. Jokingly referred to as “kissing fruit,” the black-as-coal fermented bulbs were tasty and unexpectedly mild in comparison to regular garlic, but alas they’re still detrimental to smooching.
After a much-needed breather, our seafood entrees were brought to the table. We started with the Calamari all Griglia served over a field of greens and tomatoes. Perfectly cooked, the calamari were tender and flavorful. Next was a delicious merluzzo al forno in a Marsala and mushroom reduction. Flakey and moist, the battered and baked fillets went perfectly with the rich and silky Marsala sauce.
Our sumptuous repast was capped off with a classic tiramisu and a decadent chocolate moose cake. Naturally, coffee followed dessert, then we joyfully imbibed some limoncello and grappa by the bar with Giuseppe for the finale.
As our little group is wont to do, at the end of the evening we took a celebratory photo with the flag of the Kingdom of the Two Sicilies. Keeping with tradition, the ensign was blessed earlier at morning Mass for the Feast of the Immaculate Conception.
We cannot thank Chef Viterale enough for making our holiday celebration at Ornella so special. Giuseppe and his hardworking sons went above and beyond to make us feel at home. The food and atmosphere were extraordinary and the service was impeccable; we look forward to returning soon.
Ornella Trattoria ★★★★★
29-17 23rd Avenue
Queens, New York 11105
Tel 718-777-9477