A Look at Boston's 94th Annual "Feast of All Feasts!"

The 2013 Feast of Sant'Antonio di Padova da Montefalcione
Dear readers, our friend Bobby Maida, recently returned from his trip to Boston's North End, where he and members of the East Harlem Giglio Society and Sons of San Paolino di Nola participated in the annual Feast of Saint Anthony. Bobby was kind enough to share some of his wonderful photos with us. 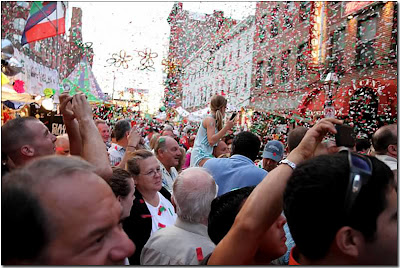 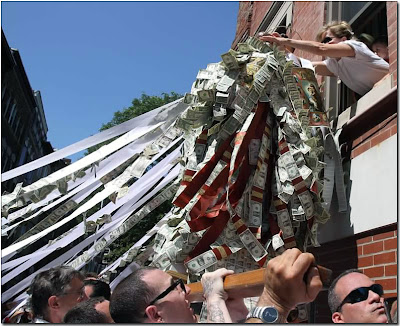 A Look at the 2013 Festa di San Rocco in Astoria, Queens

On Saturday, August 24th, I had the great privilege of attending the annual Festa di San Rocco sponsored by Societá Gioventú Quagliettana in Astoria, Queens. As always, our Quagliettana brothers and sisters did an outstanding job hosting the celebration, but this year was a little extra special for me because I had the thrilling opportunity to carry the Saint.

After a wonderful service by Father Vincent at Saint Joseph's Church (43-19 30th Ave.), we enjoyed a delightful meal and some music outside the society's clubhouse at St. Rocco's Place (37-04 28th Ave.). The festivities lasted deep into the night.

I offer my sincere and heartfelt thanks to Quagliettana Society for their hard work and generosity. Viva San Rocco! 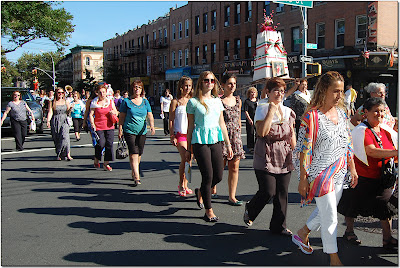 Opening Night at 'The Feast'

Contrary to all the rumors I heard, this year's Feast of Santa Rosalia in Bensonhurst, Brooklyn is back.

After work, I made my way to 18th Avenue to partake in the opening night celebration. Highlights include:
The Feast will run through September 1st!

A Look at NYC's 124th Annual Feast of San Rocco 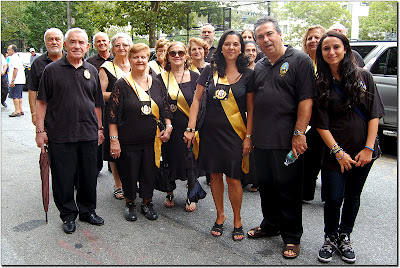 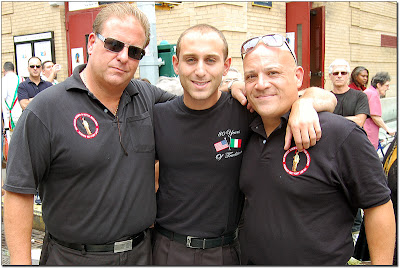 A Look at the 2013 Feast of the Giglio di Sant'Antonio, East Harlem, New York

Bruscianese pride, devotion and brawn were on display in East Harlem on Sunday for the annual Feast of the Giglio di Sant'Antonio. Hundreds gathered outside historic Our Lady of Mount Carmel Shrine Church to partake in the festivities and honor Brusciano's glorious patron, Saint Anthony of Padua, "the Lily of Lisbon."

Needless to say, the Giglio Society of East Harlem really know how to throw a party! In addition to all the delicious food and beverages, there were plenty of fun rides for the kids, spectacular music and, of course, the giglio, a towering structure of wood and papier-mâché crowned with a statue of the saint.

The lifting, or dancing, of the giglio is an old-world tradition originating in the 5th century in Campania. Immigrants brought the custom to East Harlem from Brusciano back in the early 1900s. It moved for a time to the Bronx, but the celebration was brought back to Harlem thirteen years ago. Thankfully, the Bronx just recently renewed its giglio tradition.

This year's giglio facade was a gift from l'Associazione Giglio della Gioventù from Brusciano. Resembling a church interior, it was shipped over in sections and reassembled by the Giglio Society. Proudly paraded around the parish on the shoulders of a hundred men, its exquisite design and craftsmanship was most impressive.

As always, it was nice to see some old friends and familiar faces. I'm grateful to the Giglio Society of East Harlem for preserving our culture and religious traditions. Events like these help keep the bonds of family and community alive.

Luckily we get to do it again next weekend at the Feast of San Rocco. 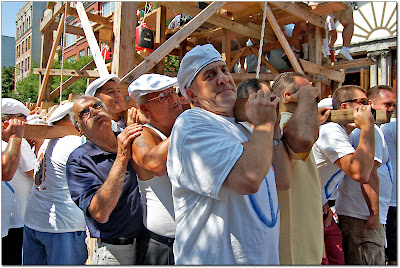