A Look at the 125th Annual Feast of Our Lady of Snow, Williamsburg, Brooklyn (Part 1)

The 125th Annual Feast of Our Lady of Snow, patroness of Sanza (SA), kicked-off Saturday in East Williamsburg, Brooklyn with a procession through the neighborhood and novena in honor of the Madonna della Neve at beautiful Saint Francis of Paola Church (219 Conselyea Street).

We had the privilege of attending the celebration and meeting many warm and friendly people. After Mass we made our way back by candlelight to the society's hall (410 Graham Avenue) for some refreshments and lively conversation.

Born on July 26, 1854 in Polistena, a small town in the Province of Reggio Calabria, Francesco Jerace received his first instruction in art from his maternal grandfather, Francesco Morani, a descendent of a prolific family of artists from Calabria. He moved to Naples in 1869 and studied painting and sculpting at the Royal Institute of Fine Arts under the guidance of Tito Angelini, Tommaso Solari and Stanislao Lista. He first exhibited his work at the Società Promotrice di Belle Arti in Naples while only 18-years-of-age.

Highly prolific, Jerace would go on to create many works for public and private audiences, including portraits, allegorical figures, religious statuary and commemorative monuments. His style fluctuated between Classicism and Naturalism.
In 1888 he was commissioned to sculpt a large figure of Vittorio Emanuele II of Savoy for the western facade of the Palazzo Reale in Naples. It is one of eight statues representing the ruling dynasties of Naples and—in the case of his subject—the Kingdom of Italy. Despite my dislike for the tyrant I must admit Jerace masterfully portrayed "il re galantuomo" in heroic fashion. Incidentally, the artist's proclivity towards idealized realism also captured the likeness of the king's vile visage perfectly.

Perhaps his most famous sculpture is the bronze group Azione ("Action"), which was made in 1910 for the ostentatious Vittoriano, or Altare della Patria ("Altar of the Fatherland"), in Rome.
Without question some of Jerace's finest works were his depictions of feminine beauty, an area in which he excelled. He was frequently sought after by discerning patrons to render model portraits or allegorical and historical heroines. His Victa, Nossis and Carlotta d'Asburgo [pictured above] are among his best.

With each commission Jerace's fame continued to grow. His work was showcased in numerous international salons and won several prestigious awards. He is considered by many to be one of the most important sculptors of the Neapolitan School in the late nineteenth and early twentieth centuries.

Even though the origins of this wonderful work are disputed I thought it would still be pertinent to include a photo of the Fontana della Sirena. Located in the Piazza Sannazzaro in Naples, some credit a young Francesco Jerace; others attribute it to the sculptor Onofrio Buccini.

I’ve written a number of articles for this blog over the several years I’ve contributed to it.  Most of them I’ve found enjoyable to write.  Some I must confess were not so enjoyable due to my disdain of the subject matter (think: Carlo “Lucky” Luciano).

It is never enjoyable to write an obituary, especially when it’s for someone I really liked.  Sadly, I must announce the death of actor Dennis Farina who passed away earlier this morning at the age of 69.

According to news reports, Mr. Farina’s parents were Sicilian immigrants. His father Joseph, whom Dennis once described as “the most honest person I have ever met” was a doctor.  His mother Iolanda was a homemaker.  Dennis was born on February 29, 1944 in Chicago, Illinois.  He was one of four boys and three girls.

Prior to becoming an actor he had worked as a cop for 18 years (1967-85) in the Chicago Police Department’s Burglary Division.  This street experience later served him well when he decided to pursue a career as an actor. He got his first taste of show biz working as a police consultant for director Michael Mann, who would later cast him in a small role in the 1981 neo-noir movie Thief starring James Caan and Tuesday Weld.  Mann was apparently impressed enough with his performance he later cast him as the gangster Albert Lombard in the series Miami Vice (1984-89).

I must confess to a certain dislike of many actors/actresses of Southern-Italian extraction due to their willingness, almost eagerness, in playing roles that denigrate our people.  While it is true Mr. Farina played such roles in his career, unlike other actors such as Al Pacino and the late James Gandolfini (who was half-Southern Italian) they did not define or overshadow his career.  He was truly a multi-faceted actor!

To me his best role was as American jewel dealer (and jewel thief) Abraham “Cousin Avi” Denovitz in the 2000 cult comedy-crime film Snatch starring himself, Benicio del Toro, Brad Pitt and Jason Statham.

His two best known movie roles were as gangsters. The first was mob boss Jimmy Serrano in the 1988 action-comedy Midnight Run.  The other was as Ray “Bones” Barboni in the 1995 comedy-crime movie Get Shorty.  It should be remembered, though, his two best television roles were as redoubtable Italian-American cops!  The first was as Detective Lt. Mike Torello in Crime Story (1986-87).  Though the series only ran two seasons it left an impact.  Time magazine named it one of the best TV series of the decade.  Though the series ran with the usual stock characters of Southern-Italian gangsters it was notable in that “the boss of bosses” in it was Jewish!

His next memorable TV role was as Det. Joe Fontana on the popular, long-running series Law & Order.  Farina had been tapped to replace actor Jerry Orbach and his character Lennie Briscoe, who was forced to leave the show due to terminal prostate cancer.  Viewers, however, perhaps still smarting over the loss of beloved actor Jerry Orbach, were less than receptive to Farina (“Never try to fill a great man’s shoes!”).  Thus, after only two seasons it was announced Farina was leaving the show “to pursue other projects.”

Dennis Farina went on to host the TV series Unsolved Mysteries (previously hosted by the late Robert Stack). In addition, he appeared as Greek gangster Gus Demitriou in the short-lived 2012 HBO series Luck.

He was married from 1970 until his divorce in 1980.  He is survived by three sons (Dennis Jr., Michael and Joseph) plus two granddaughters and four grandsons.

His career could be considered “checkered” in that he helped perpetuate negative stereotypes about our people in two memorable movie roles.  However, to his credit, he also played positive roles in two critically acclaimed TV series.  His extensive filmography playing a wide variety of colorful characters, have earned him a place in the history books.  R.I.P. Mr. Farina, you will be missed.

A Look at the 2013 Our Lady of Mount Carmel Procession, Williamsburg, Brooklyn 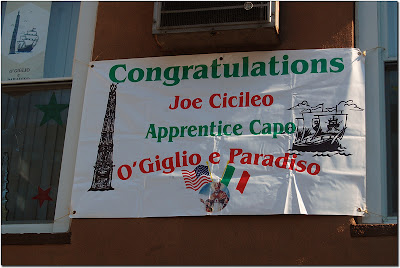 A Look at the 2013 Our Lady of Mount Carmel Procession, Elm Park, Staten Island

On Tuesday night, July 16th, we had the privilege of attending the Mass and Procession in celebration of Our Lady of Mount Carmel at Saint Adelbert's Church in Staten Island. After a wonderful service by Father Eugene J. Carrella, with fantastic choral music, a Candlelight Procession with a brass band accompanied the statue of the Blessed Mother through the neighborhood. Afterward we enjoyed light refreshments and music in the school auditorium.

A Look at the 126th Annual Feast of San Paolino di Nola in Williamsburg, Brooklyn

Giglio Sunday was a scorcher! With temperatures soaring in the nineties, the heat made the already demanding task of carrying two massive structures all the more difficult. Far from demoralizing the lifters, I don't think I've ever seen a more spirited group of men. The paranza's fortitude and devotion was most admirable.

Without a doubt, the highlight of the day was the "double lift." Symbolizing the return of Saint Paulinus from captivity and his joyous reception back in Nola (where grateful townspeople greeted him with lilies) the giglio and boat met in front of Our Lady of Mount Carmel Church and bounced in unison to the rollicking music. The crowd roared with delight.

I know I say the same thing every year, but I'm sure the thousands who were in attendance would agree, this was definitely the best giglio ever! 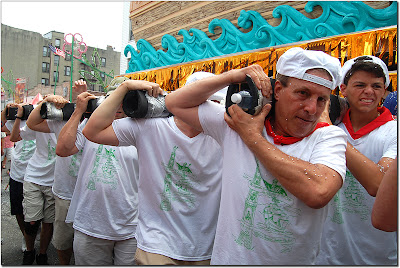 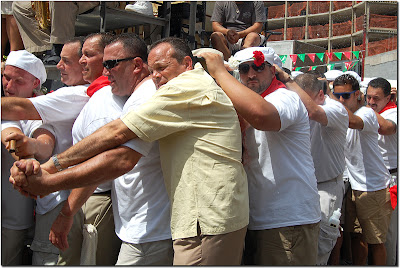 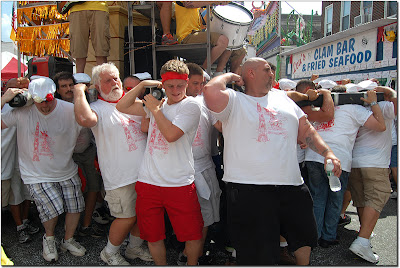 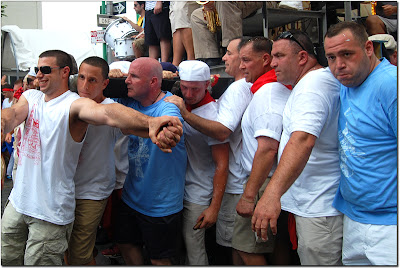 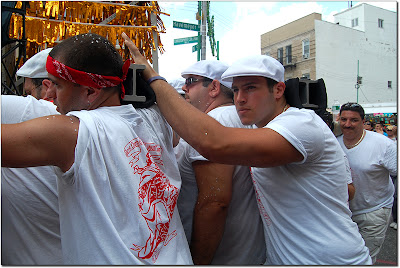 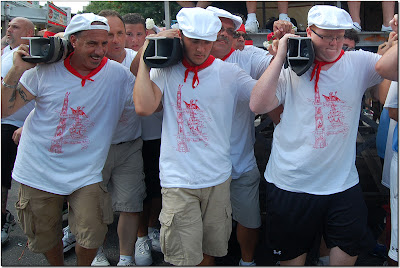 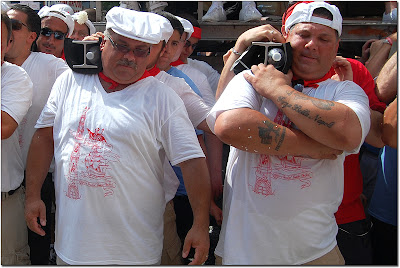