A look at Saturday's 3rd Annual Solemn High Traditional Latin Mass for the Feast of St. Michael the Archangel at the Shrine Church of the Most Precious Blood in Little Italy, New York. 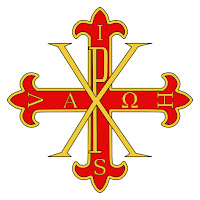 This Thursday, October 4th at 7:00PM join the Sacred Military Constantinian Order of St. George Auxiliary Corps for their first monthly food walk. Volunteers will meet at the Church of the Transfiguration (29 Mott Street) in Chinatown, New York to prepare and distribute food to the homeless.
Anyone interested in supporting this charitable endeavor can contact Cav. John Napoli at jnapoli@smocsg.com
IHSV

Busy with work and other responsibilities, over the past few months I’ve been unable to write as often (or as in depth) as I would like for the blog. However, in order to keep things current and up-to-date, when I’m short on time I will combine a few recent anecdotes into one post. Unfortunately, there is no foreseeable letup in my busy schedule so I may have to continue posting this way for a while.
Wednesday, September 19th — The Feast of San Gennaro
For the fourth year in a row, I had the great privilege of carrying the statue of San Gennaro in the procession during the feast in Little Italy, New York. While I welcome the renewed interest in carrying the statue shown by many young people this year, I know this eventually means a more limited role for me, so I cherish every opportunity I get to lift our glorious patron. Viva San Gennaro!
For our coverage of this year’s Feast see:
• Celebrating the 92nd Annual Feast of San Gennaro (Part 1)
• Celebrating the 92nd Annual Feast of San Gennaro (Part 2)

Thursday, September 20th — The Feasts of Santa Cándida and Sant’Eustachio
After work Thursday, a few of us stopped by the AKA Times Square Hotel in Manhattan to see our dear friends Salvatore and Annamaria Argenio. In town from Naples for the Feast of San Gennaro, they are also promoting their new line of clothing.
Naturally, I couldn’t leave without picking up one of their new polo shirts sporting the coat-of-arms of the Kingdom of the Two Sicilies on the left breast. Available in an array of colors and styles, I chose the pine green with navy accents and Argenio signature stitched on the right sleeve.
To my great joy, Annamaria and Salvatore remembered my devotion to Santa Patrizia and gave me a couple of prayer cards and a packet of dried flowers from the Chiesa di San Gregorio Armeno in Naples. Selflessly, they stopped by the sanctuary to pick up the religious articles before coming to the U.S. Amazingly, this was the third time in a month I received her prayer cards as a gift; it must be a sign of some sort.
Friday, September 21st — The Feast of San Matteo
My friend John is a huge collector of Duosiciliano and Neapolitan Bourbon memorabilia and has kindly granted me permission to share a few photos of his magnificent collection with our readers. Spacing them out in multiple posts, I thought it apropos to begin with couple of items related to San Gennaro.
Knowing my affinity to Most Precious Blood Church in Little Italy, New York, he first showed me a few vintage San Gennaro wall plaques from the shrine. Sadly, these days there are few high quality religious articles available at the feast, so to devotees these plaques are highly sought-after collectors items.
Even more rare and immensely more valuable was his breast star and collar of the illustrious Royal Order of St. Januarius (Insigne Reale Ordine di San Gennaro) with gilded leather case. A premier Order of Knighthood, it was founded on July 3rd, 1738 by HRH Charles of Bourbon, King of Naples and Sicily, to honor the Patron Saint of Naples and to celebrate his marriage to Princess Maria Amalia Walburga of Poland and Saxony. I’ve only seen these exquisite items once before.
* * *
Later that night, I joined my St. Rocco Society brethren at Peppino’s Restaurant in Bay Ridge, Brooklyn for our monthly “Boys Night Out.” Dinner was all the more special because it was the Feast of San Matteo and the name day of our confratello Matthew. It was also the patronal feast of our brother Andrew, who has familial roots in Salerno. Viva San Matteo!
Saturday, September 22nd — Feast of the Blessed Martyrs of the Spanish Civil War
My stretch of good fortune continued on Saturday when a friend unexpectedly gave me several thoughtful gifts, including a hardcover copy of the Ettore Gallo's Il Gran Magistero del Sacro Militare Ordine Costantiniano di San Giorgio, a few extra Due Sicilie patches, and a (long sought after) replica Royal Cockade with fleur-de-lis.
Sunday, September 23rd — The Feast of San Padre Pio
I witnessed history Sunday, as HRH Prince Carlo di Borbone Due Sicilie, Duke of Castro, and his eldest daughter, HRH Princess Maria Carolina, Duchess of Calabria and Palermo, decorated the statue of San Gennaro with the Cross of Sacred Military Constantinian Order of St. George. As far as I’m aware, this was the first time this ceremony was ever performed in North America. Viva 'o Rre!
For our coverage of the Royal Visit see:
• A Royal Visit to Little Italy (Part 1)
• A Royal Visit to Little Italy (Part 2)

HRH Prince Charles of Bourbon Two Sicilies, Duke of Castro, and the Royal Family visit the 92nd Annual Feast of San Gennaro in Little Italy, New York and decorate the statue with the Cross of the Sacred Military Constantinian Order of St. George. (See part 1) 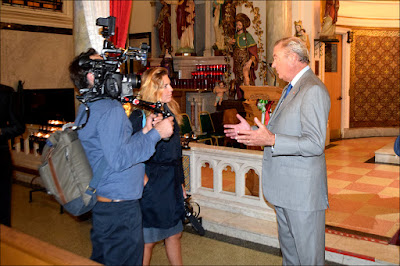 HRH Prince Charles of Bourbon Two Sicilies, Duke of Castro, and the Royal Family visit the 92nd Annual Feast of San Gennaro in Little Italy, New York and decorate the statue with the Cross of the Sacred Military Constantinian Order of St. George. (See part 2) 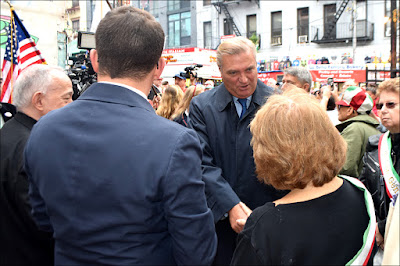 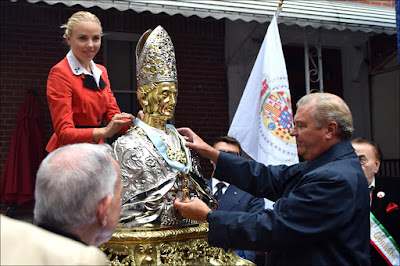