A Look at the 2014 Sons of San Paolino Procession and Barbecue, Franklin Square, New York

Thank you Bobby for sharing your wonderful photos of the Feast of San Paolino in Franklin Square, Long Island (Saturday, June 21st).

A Look at the 2014 Dressing of the Giglio, Franklin Square, New York

Every year the Sons of San Paolino di Nola of Franklin Square, Long Island erect an elaborate three story giglio in honor of their beloved patron, San Paolino di Nola (Friday, June 20th). These photos show the dedication of the builders and all the hard work that goes into "dressing" the votive tower. Thank you Bobby Maida for sharing them with us.

The Feast kicked off yesterday at St. Catherine of Siena Church (33 New Hyde Park Road) and will continue through Sunday, June 29th. The Dancing of the Giglio will take place on Saturday, June 28th at 4pm, with a special late night lift at approximately 10pm.

A Look at the 2014 Feast of Saint Anthony, Lynbrook, Long Island

Thank you Marcantonio for sharing your wonderful photos of the Feast of St. Anthony in Lynbrook, Long Island (Sunday, June 22). Each year the St. Anthony Italian Benevolent Society of Lynbrook, NY sponsor a Mass and Procession in Greis Park in honor of their beloved patron, Saint Anthony of Padua. Festivities included live music and an all-day picnic, with plenty of delicious Italian delicacies.

What a difference a day makes. Friday’s thunderstorms were long gone without a trace, giving us ideal weather conditions for Saturday’s giglio lift outside Our Lady of Mount Carmel Church in Belmont, Little Italy of the Bronx (627 East 187 Street, The Bronx 10458). Celebrants came from far and wide to partake in the celebration, including a large contingent of lifters (paranza) from Williamsburg, Brooklyn. This year's giglio paid homage to Sant'Antonio, Our Lady of Mount Carmel and San Paolino, Bishop of Nola. 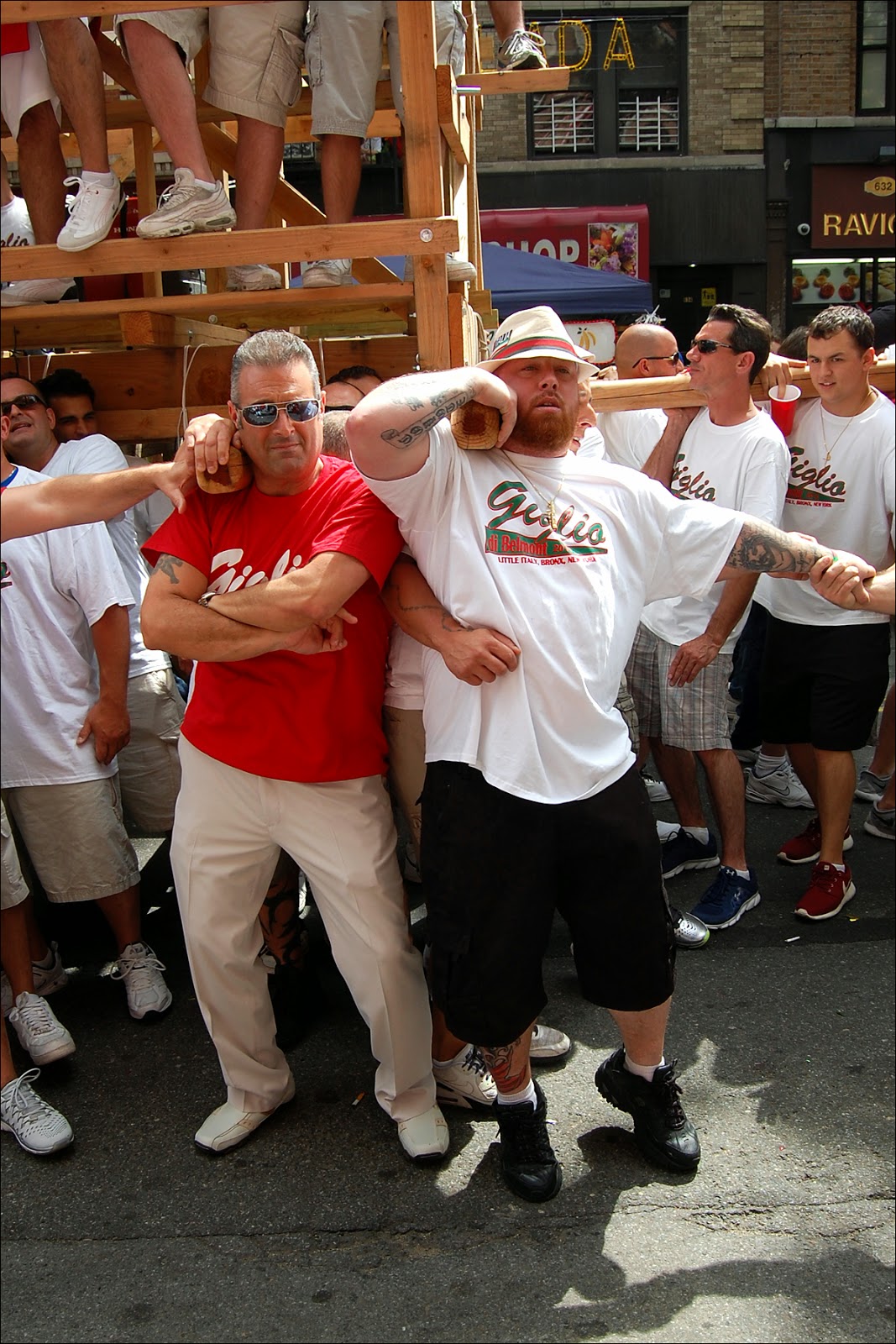 By Giovanni di Napoli
Friday, my friends and I attended the Festa di Sant’Antonio at the beautiful Shrine Church of St. Anthony of Padua in SoHo, New York (154 Sullivan Street, New York, NY 10012). Arriving early, we mingled with parishioners and members of the clergy before heading into the church basement to see the wonderful selection of Italian delicacies and religious articles for sale.

Alas, I could not partake in any food or drink before Communion, but I did get an opportunity to explore and admire the church’s wonderful collection of statuary, particularly an incredible depiction of the Holy Trinity up in the choir balcony.
Sadly, the Procession was cancelled after Mass due to poor weather. The setback, however, did not dampen the spirits of the attendees, who kept the festivities rolling in the church, thanks in part to the terrific selection of music performed by Red Mike’s Festival Band.
I would like to extend my gratitude to Toni and David Rosa for there hard work and dedication. Their devotion to Saint Anthony helped make this celebration another huge success.
Famished, my friends and I took a short stroll to Carmine Street for a delicious celebratory dinner at Numero 28 Pizzeria in the West Village (28 Carmine Street). As always, the Neapolitan style pies, cold beers and warm company were the perfect ending to a fantastic evening.

The Search For Our Ancestry

Why Research Your Ancestors?

A fellow writer recently expounded on his lack of interest in the origins of his European ancestry. He engagingly wrote ‘None of my ancestors ever looked back with anything like nostalgia. As far as they were concerned, it was "good riddance" to the Old Country and the quaint customs of impressments, bonded servitude and nothing to eat.’

He wrote that ‘now, several generations removed from the terror of it, I still have no desire to seek my roots’ and he finds ‘secret satisfaction in being the descendant of refugees who were nobodies.’

I share some of those feelings, but I must address a widespread misconception that genealogy is of little use unless it results in the knowledge that one’s ancestors were rich, or noble, or famous, or all three. If finding ‘famous ancestors’ is your sole reason for doing genealogical research, you are likely to be disappointed. The great preponderance of souls who have inhabited this earth have been neither ‘members of the U. S. Senate, nor generals on horseback, nor millionaire entrepreneurs,’ so don’t be surprised if you find none in your family tree.

Ancestral ‘celebrity searches’ can have an undesired effect.  As a novice researcher, you may go on-line and find ‘trees’, posted by others that purport not only to show your ancestors, but that one or more of your ancestral lines descends from a prince, a famous author, or other luminary.  You must ‘do your homework’ and corroborate each connection to the princely supposed ancestor, by confirming the sources of the information.  If you don’t, the presumed connection to glory is worthless.

I was the ninth and last child of Sicilian immigrants who came to America one hundred years ago. My father was a laborer, my mother a housewife (what else would she be, with nine kids?) I didn’t know it as a child, but my historical and genealogical studies have shown me that they lived in an impoverished land where the ruling classes excluded the common folk from education. To survive, they had to work at backbreaking labor in the fields or the sulfur mines.  Their rights were virtually nonexistent. Women married as young as thirteen, to bear children every two years until their mid-forties, or later.  If a woman’s husband died young, she immediately had to remarry, to gain a father for her children; then she commenced having a child every other year with her second husband.

So, what had I to gain from researching the escapees from such a wretched life? I gained the knowledge that my ancestors, and my wife’s as well, trace back to mid-1700s Sicily. That my Coniglio ancestors back to my great-great-great-great grandfather were born in tiny Serradifalco (The Mountain of the Hawk), dead center in the island of Sicily. I found that Gaetano Coniglio was not only the name of my eldest brother, but of four of my direct ancestors.  Before my father, they were all regnicoli, subjects of the Kingdom of the Two Sicilies. I learned that my father had more than the one brother that I had known of, and that ‘Pa’, like I, was a seventh son. I learned that my father, and his father before him, worked in the fetid sulfur mines from before dawn ‘til after dusk.  And that as the near-caste system required, my father married the daughter of a sulfur miner.

My investigations revealed that on my mother’s side, one ancestor was an abandoned child, left in the town’s ‘foundling wheel’, who beat the overwhelming odds for such children and survived to marry, and to generate over six hundred descendants (that I know of). I learned that none of the hundred and twenty direct ancestors I have identified, before my own parents, could read or write.

So, even though my ancestors were ‘nobodies’, I’m glad to have found out about them and their lives. I feel that not only their genes, but their experiences as well, have shaped me and my living relatives into what we are today. I’m proud of their perseverance, and the fact that my family, which descended from such simple folk, continues to emulate their examples of strength and resolve.

Coniglio is the author of the book The Lady of the Wheel, based on his research of Sicilian foundlings. See http.bit.ly/ruotaia, or order the book at http://bit.ly/racalmuto.

Coniglio’s website, http://bit.ly/AFCGen, has helpful hints on genealogical research. For genealogy questions, or to arrange for him to lecture to your group, e-mail him at genealogytips@aol.com