A Look at the 2012 Festa di San Rocco in Queens

This weekend, I had the great pleasure of attending The Societá Gioventú Quagliettana's Annual Festa di San Rocco at St. Rocco's Place (37-04 28th Ave) in Astoria, Queens. In my eagerness to venerate the Saint I showed up a little early, but was pleasantly surprised to learn that several people remembered me from the 2011 Fiaccolata. I was invited into the social club before the revelry and got to see the newly restored statue of the patron before it was presented to the public.
Just like last time, the close-knit community extended a warm welcome and treated me like one of their own. There was plenty of laughs, stories and, of course, good food, which was generously donated by a local food merchant [I apologize for not getting the establishment's name, they deserve a plug]. Because there were no food stands or game booths the atmosphere was more like a block party than a street bazaar and far more intimate than your average feast. This gave me an excellent chance to mingle with some of the guests and learn more about this wonderful society. I especially loved seeing the old photographs and listening to the childhood memories of the Festa back in Quaglietta. People from as far away as Connecticut and even Italy make the trip to partake in this magnificent celebration.
Even though I thought there was a substantial turnout I was assured that the attendance was nothing compared to year's past. Naturally, this is to be expected as neighborhoods change and people move away, but we "holdouts" need to take advantage of these opportunities and support each and every one of these events whenever possible. Despite the many similarities, each festival brings something unique and culturally significant to the table. So bring your children, have them participate and explain to them the cultural and spiritual meanings behind the rites and rituals. They'll get a small taste of the old country, an opportunity to experience their heritage firsthand and (hopefully) continue the traditions that we all love for generations to come.

I salute the Societá Gioventú Quagliettana for a job well done and thank them for their kindness and hospitality.

It's Back! The Santa Rosalia Feast Returns to Bensonhurst

After a year's hiatus the 18th Avenue Feast in honor of Santa Rosalia has returned to Bensonhurst, Brooklyn. Yesterday was the first night of the celebration and I saw some familiar faces and a few new ones. Hopefully some of the neighborhood expats clamoring online for its return will make an effort to show up and support this wonderful tradition. The Feast ends on September 2nd.

We wish the event success and hope for its return the same time next year!

A Look at the 123rd Annual Feast of Saint Rocco 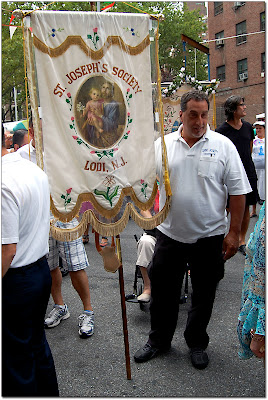 (GRIMES HILL, STATEN ISLAND, NY) All roads lead to Sicily via Staten Island. The Italian Cultural Foundation at Casa Belvedere is sponsoring an online fund raising campaign to support Trinàcria: A Tale of Bourbon Sicily. Written by Anthony Di Renzo, this historical novel—like Giuseppe Tomasi di Lampedusa’s The Leopard—chronicles the destruction of the Kingdom of the Two Sicilies during the Italian Revolution.

“We absolutely embrace this initiative,” said Louis Calvelli, Casa Belvedere’s executive director. “While the proof of Italy’s rich heritage is aplenty, Casa Belvedere is actively working on building upon the Italian cultural landscape by formally sponsoring an arts project. Once the restoration of the mansion is complete, we look forward to providing a venue for Italian and Italian American artists to showcase their work.”

Did unification benefit or ruin the Mezzogiorno, the ancestral region of most Italian immigrants? Guernica Editions, an independent press in Toronto, Ontario, believes Di Renzo’s novel “could contribute significantly” to the ongoing review of this fundamental question on both sides of the Atlantic. Dedicated to promoting new works of global literature and shattering stereotypes, Guernica considers Trinàcria “a timely book.”

Because Guernica’s government funding does not extend to non-Canadian authors, Di Renzo and consultant Roberto Ragone considered several organizations. “Casa Belvedere emerged as our sponsor because of its mission,” Ragone explained: “to preserve and promote an appreciation of Italian language, arts, literature, history, fashion, cuisine, and commerce.’ It was a perfect fit.”

The book’s author called the partnership “a stroke of fate, la forza del destino.” “I am grateful for Casa Belvedere’s support and hope my novel will contribute to its success,” said Di Renzo, associate professor of writing and Italian American history at Ithaca College. “By uncovering buried stories about our collective past, the foundation is positioning itself to play a unique role among Italian American organizations.”

Di Renzo’s novel also digs up the past. Its title derives from the ancient Greek name for Sicily. Trinàcria refers to the island’s triangular shape and the three-legged gorgon on its regional flag.  It is also the nickname of the novel’s narrator and protagonist, Zita Valanguerra Spinelli (1794-1882), Marchesa of Scalea, whose turbulent life mirrors Sicily’s rocky transition from feudalism to capitalism.

The story begins when a Hollywood film crew invades Palermo to shoot an epic about the Italian Revolution. Researching the past, the director visits the city’s Capuchin catacombs. Preserved in the catacombs among over eight thousand mummies is Marchesa Spinelli. Dead for eighty years, she remains haunted with memories, and her spirit recalls her complicated relationships with her scientist father; a British wine merchant, whom the Marchesa failed to marry; her patriotic and rebellious granddaughter; and Giacomo Leopardi, the doomed Romantic poet.

Organized by Roberto Ragone, whose professional motto is “Transforming Vision to Value,” Trinàcria’s online fundraising campaign intends to raise the necessary funds to cover the book’s editing, design, printing, promotion, and distribution. Based on their giving level, the site bestows donors with an aristocratic rank from the Kingdom of the Two Sicilies (e.g. Baron/Baroness, Count/Countess, Prince/Princess, King/Queen). Each title offers its own gifts and privileges, from bookmarks, calendars, and posters to formal acknowledgment in the printed novel and an invitation to its official book launch.

This book campaign will run until December 13, 2012. All future royalties will benefit the Italian Cultural Foundation at Casa Belverede. For more details, visit: http://www.indiegogo.com/trinacria.

For further information, please contact ROBERTO RAGONE at: 917-923-4765 or roberto.ragone@gmail.com

The Ides of August

What better way to celebrate the Nemoralia and the Ferragosto than with a Roman meal with New York City's Sicilian Food, Wine and Travel Group? Yesterday, I had the great pleasure of joining this wonderfully hospitable group for their Ferragosto celebration at Cacio e Pepe, a delightful little trattoria located in Manhattan's East Village that serves some of the best Roman fare I've had outside of Rome.

We were treated to a bevy of sumptuous courses specially prepared for our party by our gracious host Giusto, a Sicilian restaurateur who also owns nearby Cacio e Vino and Ballarò Caffé e Prosciutteria. The wine flowed like the Acis River and the food kept coming in a grandiose repast that would make the most pompous Roman patrician proud.

Like any meal, the food is only as good as the company you share it with, and I couldn't have asked for better company. The Sicilian Food, Wine and Travel Group are truly a festive bunch and remarkable for their wide range of interests and expertise. As always, the group's president and organizer, Vincent Titone did an excellent job and deserves a lot of praise for his hard work and dedication. It’s no easy task making these types of gatherings possible, especially as frequently as he does.
Photos by New York Scugnizzo