Preserving Our History, A Capitalist Perspective 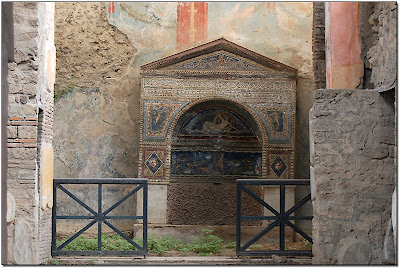 We have written before about the tragedy befalling the archeological treasures of Italy; and how the greed, corruption and misplaced loyalties within modern cosmopolitan society have contributed to their destruction. The damage to our cultural heritage has finally reached a point where it is having a negative impact on business that will only worsen if the status quo continues. In other words, the short-term profit for abandoning our traditional values is ending and the consequences have only just begun.

In the past I have attributed at least part of the blame to the greed of corporate shareholders and the trend of eliminating small or family run businesses in favor of large companies that have no use for ethnic or cultural loyalties; a trend that seems to have the full support of most western governments. I also blame the ideologies that generate anti-Western sentiment while they exploit the almost naïve generosity the West confers, and of course the many misguided Europeans that believe that cultural suicide is something to be proud of. 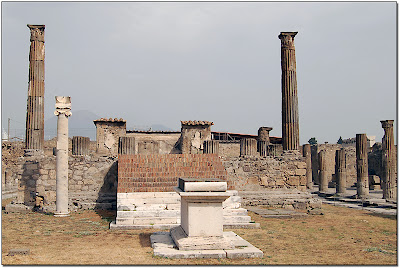 Temple of Apollo, Pompeii
However, I do my best to be fair, and while corporations are entities in and of themselves, they are made up of many individuals, some of whom are becoming just as disgusted with the condition of our archeological sites as I am. Unlike me, some of these people are in an infinitely better position to do something about it, two such men in particular.

I recently read an article in Newsweek (July 25, 2011), by Barbie Latza Nadeau, entitled “Italy’s Luxury Bailout.” From this I learned of the preservation efforts of Diego Della Valle and Luca Cordero di Montezemolo. Both of these business leaders recognize that their company brands depend on the world’s perception of Italian culture, and that the Italian tourist industry accounts for 8.6% of Italy’s gross domestic product. 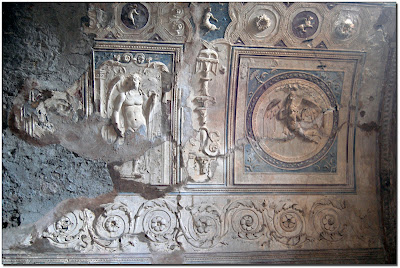 Stucco from the Tepidarium, Pompeii
Mr. Della Valle, whose family is from the Le Marche region in Central Italy, is head of Tod’s, a luxury leather goods company. He has donated over $40 million of his private funds for the restoration of Italian cultural and historical sites such as the Roman Colosseum and La Scala opera house, and has not asked for advertising rights or control of the work being done. His company is now pursuing similar initiatives. “La Scala is easily one of the top 10 symbols of Italy’s cultural excellence” said Della Valle. “That makes it vital to our global image. Closing it would send a message to the rest of the world that Italy doesn’t care.”

Mr. Montezemolo was born in Bologna, and is the president of Ferrari. He excels at raising funds for similar causes. Earlier this year he formed Italia Futura, a group that promotes Italian culture and history through the preservation of its art and archeological treasures. “Culture is our core business,” said Montezemolo. “If we don’t invest in that business, we have no future.” 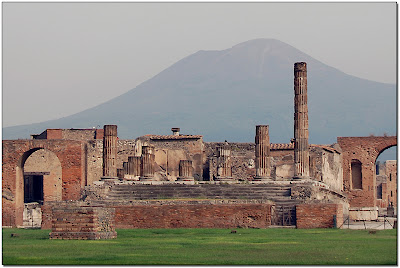 Temple of Jupiter, Pompeii
Together they are encouraging other Italian businesses to follow suit, adopt monuments and sponsor restoration and preservation efforts. Their actions have been praised, but also criticized. Their brands and future profits depend on maintaining a positive view of Italian culture and the traditions that have come to be associated with it. There is also unofficial talk of Mr. Montezemolo eventually using Italia Futura as a machine for his own political ambitions. In this light, their motivations have been labeled self-serving. I, however, do not see this as a bad thing. In fact, it almost assures a stronger effort to preserve several of the things that people like me care about.

There will be those who ask why a Southern Italian ethnocentric blog would promote Central and Northern Italian businessmen, especially since we continually state that Southern Italy has been historically exploited by the Northern government and corporations. The answer is twofold. 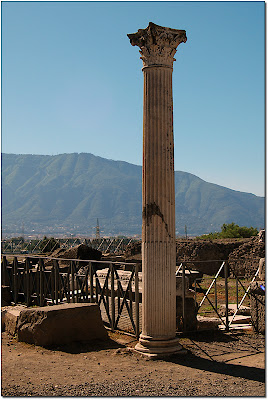 The sacred grove of Venus, Pompeii
First, and quite simply, these men are also preserving Southern Italian sites and relics such as Pompeii. We need the funds and we need them badly. Is this attitude selling out? I hardly think so. We relentlessly promote our people’s cultural history as one of the cornerstones of our philosophy. With this in mind it would be foolish to refuse their efforts to help preserve it, especially at a time when the aid comes freely. Italian companies, among other Western corporations, have donated millions in relief efforts to third-world countries with little possibility of return profits, so when they invest in our own cultural heritage and protect their own interests in the same action, there is little cause to complain.

Second, Della Valle and Montezemolo may not be Southern Italian, but they are European, and Northern and Central Italy are part of our greater European heritage. I obviously care about preserving Southern Italian cultural interests, such as Pompeii, Matera and the Palazzo dei Normanni, but I have no wish to see any other ancient European landmark destroyed; or, for that matter the relics of the Egyptians, Asians or any other people. I am, however, of European descent, and as such the history of all Europe is of special significance to me. A sentiment that is commonly understood and practiced among Asians, Africans and Native Americans, many of whom take there own cultures and historical relics very seriously indeed, as they should. 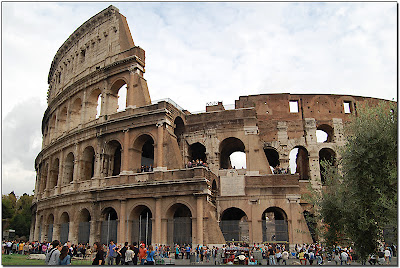 The Roman Colosseum
The key to promoting your interests in any Capitalist society is making your ideas financially profitable. If you can do this, people will sell your idea for you, even to their own detriment. Take, for example, the fashionable “Che” T-shirts featuring the Communist revolutionary point man Che Guevara. If this person’s ideas, or methods, were applied, many of the bourgeois merchants manufacturing these T-shirts would be imprisoned, murdered or driven into poverty or exile. As you can see, this doesn’t stop them.

Now look at a situation where very successful businessmen have come to the conclusion that their profits actually depend upon the preservation of our cultural heritage. This is a significant development with enormous potential, and we should encourage it. The fear of commercialization is valid, but that possibility may not be as big a threat as it first seems. Over commercialization would not only cheapen our cultural heritage, it would cheapen the brands that rely on it, and eventually cause a loss of profit. “I don’t want Pompeii to become a Disney World,” said Montezemolo. “But I also don’t want it to disappear entirely.” 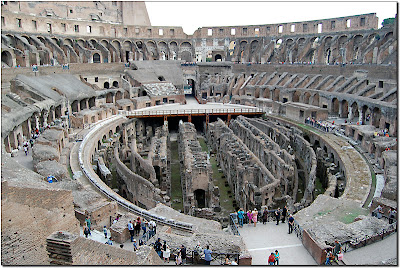 Inside the Roman Colosseum
I honestly don’t know how either of these businessmen feel about Southern Italian political autonomy, I haven’t dug deeply enough to confirm anything. If I had to guess, I’m sure that their opinion would have a lot to do with popular sentiment and the effect they think it would have on their businesses. On the Italia Futura website, I did see some positive support for Southern culture and economic potential. I do know that I am grateful for the efforts that they have made in supporting Italian culture and history, both Northern and Southern.

In conclusion, the motivations of these powerful businessmen might have an element of self-interest, but as long as it contributes to the preservation of our culture, then it doesn’t matter. With respect to cultural preservation, selfish motivations or political ambitions are, at this point, irrelevant to our purposes; the long-term results should be the focus. It is often said that the road to Hell is paved with good intentions, so perhaps the path to salvation can contain some questionable cobblestones. With Heaven or Hell, it is the ultimate destination that is important, after all.