Investiture and Mass in the Presence of the Royal Family of the Two Sicilies at St. Patrick’s Cathedral in New York City

By Giovanni di Napoli
On Thursday, March 3rd, hundreds turned out for the Investiture and Mass at St. Patrick’s Cathedral in New York City on the occasion of the visit of the Royal Family of the Two Sicilies. The Investiture by command and in the presence of HRH Prince Carlo di Borbone, Duke of Castro, took place in the Lady Chapel behind the High Altar. Close friends and family (as well as members of the Equestrian Order of the Holy Sepulchre, the Order of Malta, the Order of Saint Stanislaus, and the Order of the Immaculate Conception of Vila Viçosa) watched with pride and joy as loved ones were invested into the Sacred Military Constantinian Order of Saint George and Royal Order of Francis I of the Royal House of Bourbon Two Sicilies.

Following the ceremony, there was a solemn procession from the chapel through the packed nave to the High Altar. Mass was concelebrated by 23 Priests, four seminarians from the Archdiocese of Newark, and other assistants. During his inspirational homily (delivered in English and Italian) his Eminence lauded the efforts of the Royal Family and religious Orders, signaling out Delegate John M. Viola and Mayor Pasquale Menna for special praise.
In one of the many beautiful and touching moments of the liturgy, Princess Maria Carolina, Duchess of Capri, and Princess Maria Chiara, Duchess of Palermo, offered the Prayers of the Faithful. Cantor Salvatore Basile, accompanied by organist Daniel Brondel, performed a stirring rendition of Giovanni Paisiello’s Inno al Re, the National Anthem of the Two Sicilies. The service concluded with the veneration of the Relic of the True Cross.
Afterward, about three hundred celebrants attended the reception at the luxurious Lotte Palace Hotel (455 Madison Ave.), where we enjoyed some champagne, a wide range of delicious hors-d'oeuvre, and plenty of camaraderie. While addressing the audience, Their Royal Highnesses were clearly touched by the love and affection accorded them by members of the diaspora community.
The already fantastic evening became even better when I was introduced to the Royal Family. Never could I have imagined that a neobrigante from Brooklyn would actually get to meet Their Sicilian Magesties. It was a privilege and an honor I won’t soon forget.
I want to thank all the members of the Sacred Military Constantinian Order of Saint George for their hard work and dedication. As always they did a tremendous job. Heartfelt thanks to Delegate John M. Viola, Chancellor Pasquale Menna, and Vice Chancellor Patrick O’Boyle for their warmth and hospitality. We are indebted to their leadership and devotion to our community. Special thanks to Charles Sant’Elia of the Comitati Due Sicilie USA. Charles is a tireless organizer and true warrior. I look forward to our continued collaboration. Viva 'o Rre! 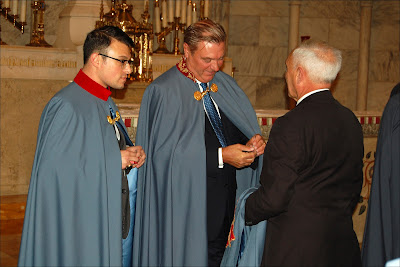 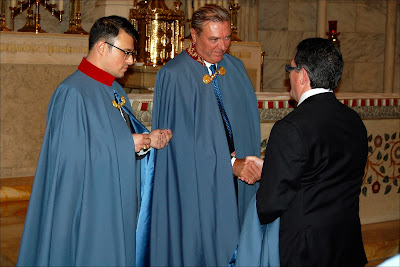 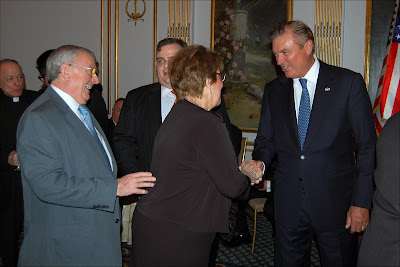 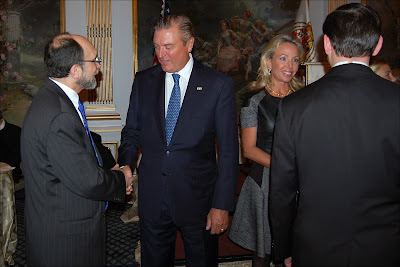