A Piece of History at Ferdinando’s Focacceria

While waiting for my order (panelle and arancini) today at Ferdinando’s Focacceria (151 Union Street) in Carroll Gardens, Brooklyn, chef and owner Francesco Buffa was kind enough to show me a couple of pieces of his grandfather’s old carretto (cart) from Carini, Sicily. Intricately detailed, Sicilian carts were often decorated with chivalric motifs, including scenes from the famous Chanson de Roland, an old epic poem based on the legendary Battle of Ronncevaux.

Proudly displayed near the entrance, a painted panel (see above) depicts the death of a paladin during what looks like a duel in front of a band of Saracens. A second panel (see below) with a highly stylized sun and flowers is on display in the dining room. Two ornately carved poles, which Chef Buffa explained to me were used to help fasten down the cart's heavy load, are the only other surviving pieces.

Food is not the only masterpiece at Ferdinando’s. 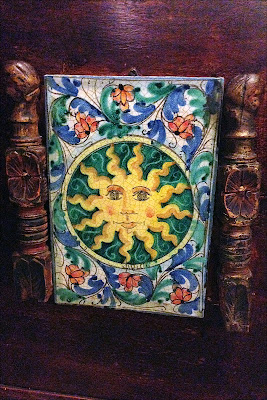