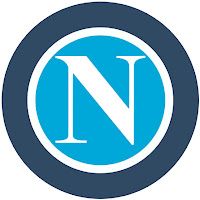 I'm sure by now this is old news, but I was too busy celebrating with friends to post something sooner. Yesterday (Sunday, May 20th) Napoli defeated Juventus 2-0 in the Coppa Italia Final (Italian Cup), winning the club their first silverware in 22 years. (In 1990 they won the Italian Super Cup)

In front of a packed and raucous Stadio Olimpico in Rome, Napoli took on reigning League champions Juventus for the coveted trophy. Having just won their 28th Scudetto, the Turin powerhouse were looking to win the double and complete their incredible undefeated season. Napoli haven't won the Coppa Italia since 1987.

Not surprisingly, Napoli's celebrated "three tenors" would play an important part in the outcome. Partenopei took the lead in the 63rd minute after Edison "El Matador" Cavani hit the back of the net in a perfectly executed spot kick. The penalty was awarded after Ezequiel Lavezzi was fouled in the box by Juve goalkeeper, Marco Storari. Marek Hamsik sealed the deal with a clinical strike in the 83rd minute, finishing off a patented Napoli counter attack.

Unfortunately, the hard fought contest was marred in the final moments when (former Napoli) hitman Fabio Quagliarella was sent off with a straight red card for elbowing Napoli defender Salvatore Aronica in the face.

The victory was a fantastic finish to an entertaining campaign, which saw Napoli make it to the Champions League's Round of Sixteen (sadly losing to tournament winners Chelsea) and finish in (admittedly disappointing) fifth place in Serie A, thus failing to qualify for Champions League again next season.

First the bad news: U.S. Lecce were condemned to relegation after a regrettable season. The Salentini finished third from bottom.

The good news: Pescara Calcio return to top-flight football, joining fellow Southerners Palermo, Napoli and Catania in the 2012/13 Serie A campaign. With their impressive 3-1 away victory over Sampdoria on Sunday (May 20th) the Biancazzurri secured promotion from Serie B, earning them the right to play against Italy's elite clubs. Not since 1992/93 has the squad from the Abrruzzo graced Serie A with their presence, and we welcome them back. Congratulations and good luck Pescara.