Sacred Art From Abruzzo at the Cloisters 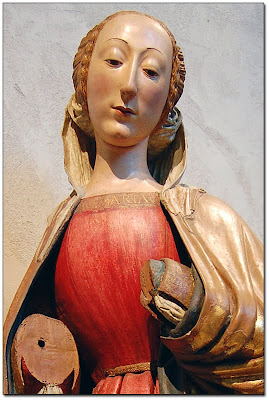 While reading Lucia Arbace's very informative essay, "Values and Symbols Dreamed in Clay," in the commemorative La Madonna di Pietranico compendium, I was curious to learn that the Metropolitan Museum of Art has a Renaissance statue from the Abruzzo in their collection. A frequent guest at the museum, I thought it was a bit strange that I was unfamiliar with the work. Thanks to the Internet, I soon discovered that the statue is housed in The Cloisters, a branch of the MET "devoted to the art and architecture of medieval Europe," located in beautiful Fort Tryon Park in Northern Manhattan.

As you can imagine, after seeing the recently restored Madonna di Pietranico at the Italian American Museum I was very excited with the prospect of viewing another devotional statue from the Abruzzo. So I packed my camera and headed to The Cloisters.

Located in the Late Gothic Hall, among an incredible array of European religious statuary from the Middle Ages, is the Kneeling Virgin (ca. 1475), attributed to Paolo Aquilano. The polychromed wood sculpture, carved in willow, stands almost 47 inches tall and, some believe, may have been part of a presepio (Nativity) ensemble. The elegant figure, with "Ave Maria" inscribed in gold along the neckline, represents the Virgin Mary adoring the (now lost) Christ Child. Her hands, probably clasped in prayer, are also missing. 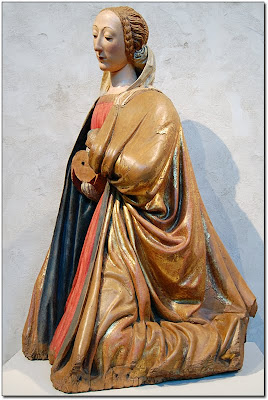 The statue's striking resemblance to the enthroned Madonna and Child (Staatliche Museen, Berlin) and the fictile Levapene Madonna and Child from Civitaquana (Museo Nazionale Abruzzese, Aquila) has been remarked upon by scholars and is the primary reason for its attribution to Aquilano.

It has also been suggested that the Kneeling Virgin's crèche may have influenced the Fontecchio presepio (Museo Nazionale Abruzzese), loosely attributed to the prestigious painter-sculptor Saturnino Gatti (L'Aquila 1463–1518 L'Aquila). Gatti is generally considered to be one of the finest Renaissance sculptors from the Abruzzo. Also a painter, Gatti's wonderful painting, The Translation of the Holy House of Loreto (ca. 1510), can be seen at Metropolitan Museum of Art. 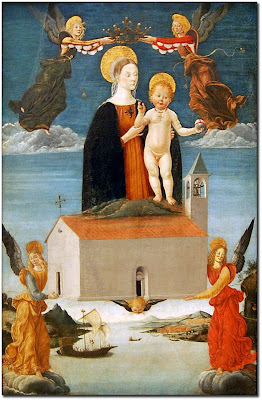 The Translation of the Holy House of Loreto by Saturnino Gatti

Making my way through the galleries, admiring the collection, I stumbled across a tall, heavily damaged statue of Saint Nicholas of Bari from the parish church of San Nicola di Bari in Monticchio, L'Aquila. Carved from poplar, the Blessing Bishop stands 73 1/2 inches tall and is a rare example of Gothic wood sculpture from Italy. Prominently displayed, the idol dominates the Early Gothic Hall. An employee explained to me that it was recently moved to its current location so patrons can get a better view of its hollow backside. Artist unknown, the statue dates from the late fourteenth Century and originates from the Abruzzo or nearby Umbria. 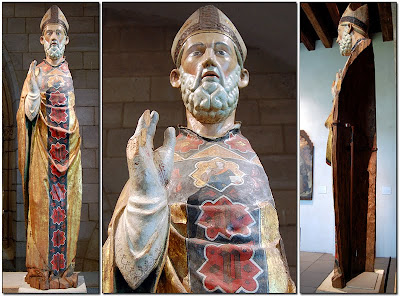 Among the late twelfth- and thirteenth-century sculptures on display in the cloister from Saint-Guilhem-le-Déésert, is a wonderful limestone relief from the pulpit of the Church of San Michele Archangelo at San Vittorino, Abruzzo. Dedicated to Saint Luke, a winged ox (the saint's symbol), framed with an elaborately carved border, holds a book with an inscription from the Gospel. A second epigraph makes reference to the otherwise unknown sculptor, Master Stephanus and his atelier. 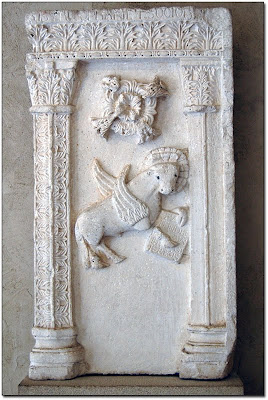 Relief from the Pulpit with the Symbol of Saint Luke

Another item in the Cloisters collection that may be of special interest to our readers is an exquisite ivory Liturgical Comb from Southern Italy. Dating from the late eleventh- to early twelfth-century, the double sided comb was used for ritual preparation by priests before Mass. Measuring 3 3/4 x 4 1/2 x 11/16 inches, the delicate carvings on the spine show two sparring warriors riding fantastic creatures from Greek mythology. For more on ivory carvings from Southern Italy, the MET has several magnificent examples on display, including an ornately carved casket and oliphants (hunting horns). 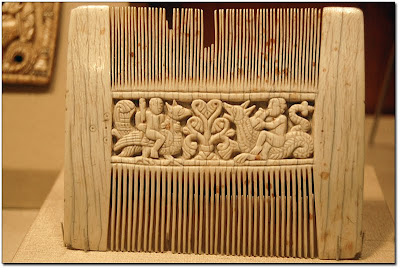 In addition to the museum's renowned gardens and cloisters, other highlights include the Gothic Chapel, the incredible Unicorn Tapestries and, of course, the famous Annunciation Triptych (Merode Altarpiece) in the Campin Room. The institution's enviable collection boasts plenty of examples of sacred Medieval and Byzantine painting, sculpture, stained glass and much, much more.

If you haven't done so already, time is running out to see La Madonna di Pietranico at the Italian American Museum. The exhibit ends on June 2, 2011. Afterward the statue will be returned to the Chiesa di San Michele e Santa Giusta in Pietranico, Abruzzo. 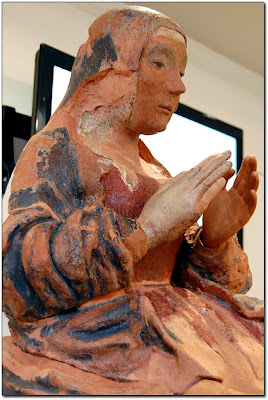