Some Thoughts on the She Built NYC Monument Debacle

I wasn’t planning on writing about the recent St. Frances Xavier Cabrini monument controversy in New York City, but several readers convinced me to break my silence and vent my presumed “outrage.” Yielding to their appeals I will offer my two cents, though I’m sure my opinion on the debacle will not be what they imagined it to be.

For those who are unaware, a competition was held in 2018 by the She Built NYC project to recognize seven so-called “trailblazing women of New York” for a monument-building initiative to help address the lack of statues depicting women in the city and “correct” the historical record.

The progressive scheme was spearheaded by Deputy Mayor Alicia Glen and Chirlane McCray, wife of New York’s socialist Mayor Bill De Blasio. How Mrs. McCray and gang acquired the expertise or authority to spend an estimated $5 million in taxpayer money to build these monuments in a crumbling city, is puzzling to say the least, but their poor execution of the project was most definitely not a surprise.

Predictably, the project was received with as much enthusiasm as the mayoral elections.(1) With an estimated population of 8.6 million people, a mere 1,800 suggestions were made. Of the 320 women nominated Mother Cabrini was by far the most popular, receiving 219 votes. Despite her popularity among voters, the first American Saint was snubbed by McCray and her blue-ribbon panel. Instead, they chose their own nominees, two of which aren’t even women.(2)

Honestly, who really expected otherwise from this administration? Like virtually all politicians, New York’s First Family have their own agenda and will stop at nothing to impose their will on the rest of us.


Needles to say I did not vote. Having never expected good or fair results from them to begin with, I can truthfully say I’m not upset or disappointed at all. In fact, I’m actually a little relieved they chose to ignore the “will of the people.” Not because the decision exposes their partisan hypocrisy and shows the true face of our Democratic betters. No, that mask has been off for a long time and we already know the whole democratic process is a sham. I’m relieved because our beloved patroness will not be lumped in with some of the other less than admirable honorees or tainted with any connection to this amoral administration.

I’m also glad we won’t have to deal with a potentially heinous work of art by some two-bit hack impersonating an artist. We Catholics have enough problems with modernists in our Church corrupting the aesthetics of our faith (among other things) from within that we don’t need secular and other hostile forces piling on the hate and degradation. Besides, we already have monuments and shrines dedicated to this great Saint. Her likeness can be found in many churches across the city, most notably at St. Francis Cabrini Church in Bensonhurst, Brooklyn and the St. Frances Xavier Cabrini Shrine in Washington Heights, New York.

As an aside, I would like to add that unlike some of my paesani, I do not believe the saint was snubbed because she was Italian. To be sure, I’m not denying the existence of anti-Italian bigotry; I experience it often enough myself to know that its alive and well, but if anything the Mayor and his wife seem to be Italophiles in their own fashion. I believe Mother Cabrini is not getting a statue because she was a good Catholic and that stands diametrically opposed to the values they’re trying to promote with this contrived agitprop.

Sure, I would like to see more monuments to our saints and heroes in our city, but in an increasingly secular, iconoclastic society bent on rewriting history and tearing down statues of historical figures deemed controversial by the PC apparatchiki, the likelihood of that becomes ever more improbable. Instead, our community needs to start focusing more on upholding traditional values and the formation of faith and character. We need to prevent the closing of our churches and the dissolution of our families, or, like with so many today, these monuments will cease to retain their meaning.

~ Giovanni di Napoli, Thursday, September 12th, Feast of the Most Holy Name of Mary
(1) In 2017 the incumbent Mayor Bill de Blasio won re-election with only 726,361 votes. A measly 8.5% of the city’s voters participated in the democratic charade. This was a drop from the already beggarly 795,679 votes he got in 2013. 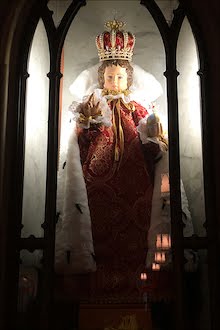