Photo of the Week: Peasant with Goats by Vincenzo Caprile

A Look at the 108th Annual Feast of Saint Ann in Hoboken, New Jersey (Part 3)

A Look at the 108th Annual Feast of Saint Ann in Hoboken, New Jersey (Part 2)

A Look at the 108th Annual Feast of Saint Ann in Hoboken, New Jersey (Part 1)

Announcing the 2018 Feast of Saint Gabriel in Baltimore, Maryland

Announcing the 2018 Feast of the Madonna Del Soccorso Di Sciacca in Norristown, Pennsylvania 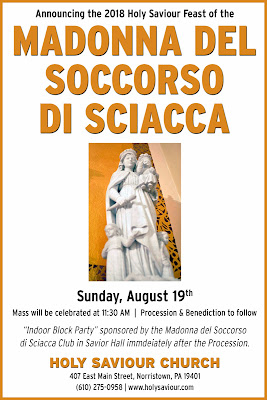 New Kindle Edition: The Army of the Kingdom of the Two Sicilies 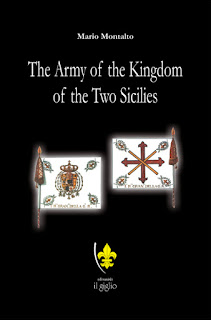 New title that may be of interest to our readers. Available at Amazon

Listing does not imply any endorsement

Announcing the 108th Annual Feast of the Madonna Dell'Assunta in Westbury, Long Island

Around the Web: IAP 66: Do They Still Speak Italian in Italy? An Italian American Guide to Visiting the Motherland

At the end of the show, we give you a few tips that you can use when visiting Italy to make your experience there even more remarkable.

Listen to the episode

Announcing the 2018 Feast of San Ciro in Garfield, New Jersey 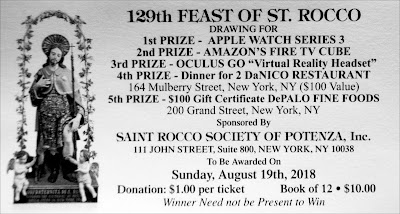 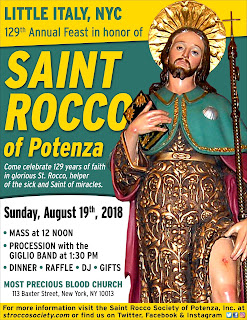 This is our main fund-raising event. It is our hope that the profit from the raffle can go toward our society's budget for the feast and to help support Most Precious Blood Church in NYC's Little Italy. This will help our Society keep the Feast of St. Rocco and our Italian-American Catholic Traditions going.

3rd Prize: Oculus Go - 32GB Stand-Alone Virtual Reality Headset. Oculus Go is the easiest way to jump into virtual reality. For the first time, Oculus brings you a truly standalone VR headset—with no additional devices required while in VR. Oculus Go is portable, comfortable, and easy to use.

Winner of the Raffle does not need to be present. We will call and/or email the winners after the raffle drawing on the evening of Sunday, August 19th.

Come Join us on Sunday, August 19th, 2018 for the 129th Annual Feast of St. Rocco. For details please visit our website at http://www.stroccosociety.com

Photo of the Week: Lucanian Tomb Painting of Charon the Ferryman of the Dead

Announcing the 130th Annual Feast of Our Lady of the Snow in Williamsburg, Brooklyn

Friday, July 27th
Candlelight Procession will depart from the society hall at 7pm
Novena at St. Francis of Paola Church (219 Conselyea St.) at 8pm
Refreshments will be served after the procession

Sunday, August 5th
The Feast Day of Our Lady of the Snow
Procession will depart from society hall at 8am
Mass will be celebrated at St. Francis of Paola Church

Announcing the 2018 Feast of Santissimo Salvatore in Norristown, Pennsylvania 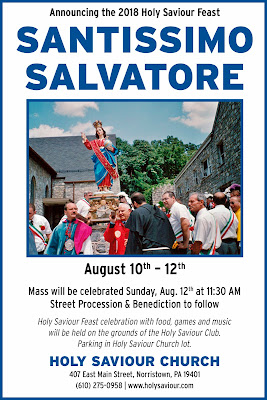 Reprinted from italianenclaves.com
For almost 120 years, the Dance of The Giglio has been a tradition in many Italian American neighborhoods in the United States. Today, as Italians have become more assimilated into American society, the tradition has been narrowed to only four “lifts.” In Brooklyn, for instance, over the last 118 years, 120 men have endured the physical sacrifice of lifting a five-story man-made tower weighing close to four tons in honor of their patron saint, San Paolino, who is the Patron Saint of their ancestors’ town in Nola, Italy. This magnificent tower is called The Giglio, which means Lily in Italian, and it sits upon a platform along with a full band and chaplain. In Nola, there are still many Gigli that are carried through the town in complex routes sometimes lasting an entire day of back-breaking dedication. There are currently four Giglio Dances that still take place in America: Williamsburg in Brooklyn, Harlem in Manhattan, Belmont in the Bronx and Franklin Square in Long Island. Continue reading