The Search for our Ancestry (XLVII) 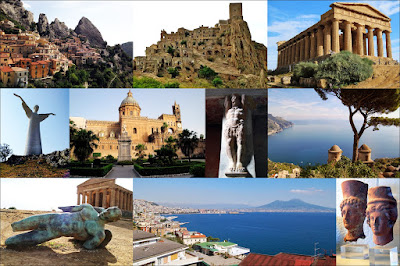 Spelling Bee
By Angelo Coniglio
Researchers of Sicilian and Italian genealogy are blessed by the wealth of original records of birth, baptism, marriage and death that may be found for many ancestral towns, on microfilm or on line. Often those original records may have misspellings, or valid variations of given names or surnames. In many cases, misspellings by English-speaking clerks went unrecognized by illiterate immigrants, and the misspelled name became the ‘official’ name of the person and his descendants. In today’s computer-centric records, errors in spelling are often due to mis-reading and mis-transcription; for example, by enumerators on original censuses. And when using search engines on sites like ellisisland.org, familysearch.org or Ancestry.com, spelling mistakes by indexers can make searches maddeningly difficult.

I can’t possibly cover every spelling error by every clerk or indexer, but I’ll address some common ones here.  The names initially given below are the names as they would have been spelled on original records in ‘the old country’.  When I spell something phonetically, I am using English phonetics.
GIUSEPPE (joo-SEHPP-ee) and GIUSEPPA (joo-SEHPP-uh) are the masculine and feminine forms of the English the given name Joseph. These are very likely the most misspelled names of any. If you knew your ancestor as Joseph or Josephine, their passenger manifests would probably list them as Giuseppe or Giuseppa (Giuseppina, a diminutive form of Giuseppa, led to the English version, Josephine). The ‘I-U’ in these names is notoriously transposed in many on-line search engines as ‘U-I’.  If you have no luck with the proper spellings, try ‘Guiseppe’ and ‘Guiseppa’. Note that these are not valid variations, but misspellings of the names. Another error is the spelling of Giuseppe as ‘Giuseppi’ or ‘Guiseppi’.
The surnames GIUDICE (JOO-dih-chee) or Lo GIUDICE literally mean ‘judge’ or ‘the judge’.  ‘Guidice’ or ‘Lo Guidice’ have no meaning, but try those spellings if the correct ones don’t lead to success.
The surname TAGLIAFERRO means ‘cuts iron’, but often was pronounced and spelled ‘Taliaferro’ and even ‘Tolliver’.  The name may be given on an original U. S. Census as ‘Tolliver’, but if the individual is Sicilian or Italian, the name on the passenger manifest and ancestral town records would be Tagliaferro.

CASTELLO is a surname meaning ‘castle’.  But pronounced in the Italian language it is ‘kah-STELL-oh’, so it may be misspelled ‘Costello’ on American censuses.
IPPOLITO, IANNELLO, IACONO and other surnames beginning with an upper-case ‘I’ may confuse indexers to no end. This is because the script ‘I’ is mistaken for a ‘T’ or a ‘J’, or a ‘G’, etc.  Researchers of Italian descent will immediately recognize that ‘Tppolito’, ‘Jppolito’, ‘Gppolito’ and so on, are unpronounceable and non-existent Sicilian or Italian surnames, but you will find them indexed that way! Also, names like Iannello and Iacono often were spelled phonetically by census enumerators, and became forevermore ‘Yannello’ and ‘Yacono’.
MARCELLO is an interesting surname. It’s properly pronounced ‘mar-TCHEHLL-oh’ (‘cello’ as in the name of the stringed instrument), so many enumerators thought it should be spelled ‘Marcello’. But ‘Marchello’ is pronounced ‘mar-KELL-oh’ in Italian, so many with the surname Marcello became known as Markello.
BONGIOVANNI, CALANDRA, and LANZA all contain the letter ‘N’. Written in cursive, a lower-case ‘n’, in certain handwriting, looks like a lower-case ‘u’, so these surnames get transcribed as ‘Bougiovanni’, ‘Calaudra’ and ‘Lauza’. Really!! If your surname has the letter ‘n’ in it, try replacing one or more of them with the letter ‘u’ and search again!
These are but a few of the many naming errors that are encountered by genealogists. Try to familiarize yourself with valid Sicilian and Italian surnames. If there’s a doubt, go to http://www.cognomix.it/mappe-dei-cognomi-italiani which is a site that shows modern-day distributions of the selected surname (‘cognome’ in Italian). For spellings and English versions of given names, see my page at http://bit.ly/SicilianNames
Coniglio is the author of the book The Lady of the Wheel, inspired by his Sicilian research. Order the paperback or the Kindle version at http://bit.ly/SicilianStory Coniglio’s web page at http://bit.ly/AFCGen has helpul hints on genealogic research. If you have genealogy questions, or would like him to lecture to your club or group, e-mail him at genealogytips@aol.com