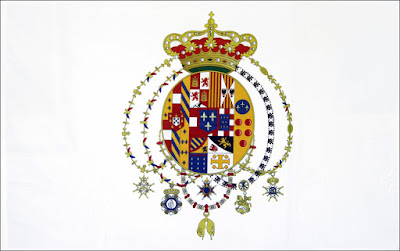 During Thursday’s Europa League match between SSC Napoli and FC Midtjylland police inexplicably confiscated dozens of flags and scarves depicting the coat of arms of the Kingdom of the Two Sicilies from Neapolitan supporters. Organized by the Movimento Neoborbonico, the festive initiative called “One Hundred Flags of the Two Sicilies at the San Paolo” was meant to raise awareness about southern Italian history and “bring out a sense of identity of a people that have been united from 1100 to 1861.”
Curiously, Italian soccer continuously fails to curtail the derogatory invectives hurled at southerners at matches across the boot, but shamefully has no problem cracking down on a peaceful, inoffensive expression of local pride by Neapolitan fans. By seizing the regalia, the ugly episode proves, once again, the hypocrisy and double standards against the people of the south.
In the meantime, representatives of the Movimento Neoborbonico will present a complaint to the courts and have requested a meeting with police authorities for an explanation regarding the incident. We anxiously await the results.
* * *
For the record, Napoli beat the Danish side 5-0 and qualified for the next round of the tournament with two games to spare. Forza Napoli!