The Search for our Ancestry (II) 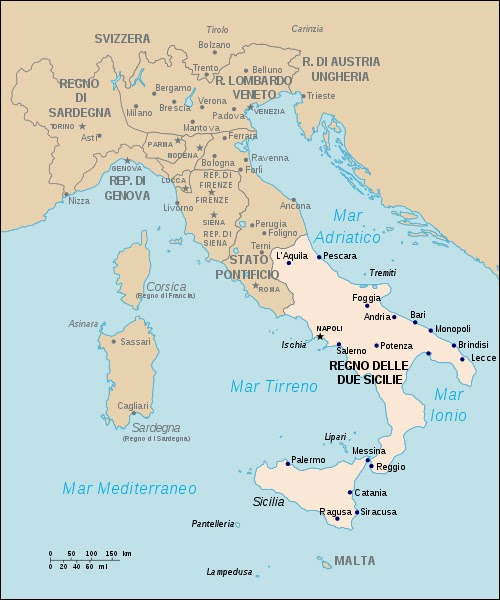 Italians and Sicilians
By Angelo Coniglio
Many Americans of Italian descent make the same plaintive comment when asked about the origins of their immigrant ancestors: “My parents (or grandparents) never talked about it.” I hope to help you discover long-lost information about your roots.  There are millions of descendants of Italians and Sicilians in the United States, with a wealth of materials available for them to trace their ancestry.  Though Sicily is now a part of Italy, the history of their relationship can help to understand the types of records that may be available on the mainland and on the island.  Many ask: “Sicilian, Italian – aren’t they the same?”
The iconic, boot-shaped Apennine peninsula that we all recognize had been called Italy for millennia, its name derived from Italus, the ancient mythic king of the ‘boot’ region. But before the modern era, the nation ‘Italy’ had existed only in the north, briefly in medieval times as a small alpine kingdom, and later for a few years under Napoleon. He reigned from 1805 to 1814, well before the 1860 ‘Risorgimento’ led by Garibaldi. It united northern states including Tuscany, Genoa, and Venice, as well as Sardinia, with the southern Kingdom of the Two Sicilies to form the Kingdom of Sardinia, which then became the Kingdom of Italy. The northern mainland states, a mix of various republics, duchies and city-states, each previously had their own rulers, laws and customs.
The northern Apennine peninsula, more wealthy in resources and more commercially developed, has the grandeur of Rome, with the Coliseum and other engineering marvels; Venice with its romantic canals and legendary glassmakers; and Florence, birthplace of the Renaissance, nestled in the beauty and mystery of Tuscany’s lush hills.  Italian contributions to the visual arts, music, oratory, and to the foundations of the very laws that today define civilization, justifiably make Americans of Italian descent proud of their heritage.

Sicily, on the other hand, had existed as a country for centuries before its neighbor to the north achieved nationhood.  From 1130 until 1816, from the Abruzzo south, including Naples and the island of Sicily, was the Kingdom of Sicily, the world’s first ‘modern’ nation.  The region comprising that nation acquired a special name that is applied to this day: ‘Mezzogiorno (noontime), for the blazing hot sun that is its trademark. Encompassing treasures from the castles of Naples to the Greek temples at Agrigento and the Norman splendor of Monreale, the Kingdom of Sicily developed into a multicultural land, evolving Sicilian, the first ‘Romance Language’. After 1816, the nation, covering essentially the same territory, became known as the Kingdom of the Two Sicilies, and it was this nation that Garibaldi captured and presented to the King of Savoy to create a ‘unified‘ Italy in 1861. After unification, the island of Sicily eventually became Italy’s ‘autonomous region of Sicily’.
There were differences in culture between north and south.  During much of its history, Sicily was ruled by Phoenicians, Carthaginians, Greeks, Romans, Saracens, Normans, Germans, French, Spaniards, and others. This milieu affected much of the southern Italian peninsula. After millennia of subjugation, southerners distrusted ‘outsiders’.  Though the Sicilian language preceded the Tuscan used in the north, it is not as complex, and at times urbane northerners viewed Sicilian-speakers as somehow inferior. These differences often led to chilly relationships, even among the northern and southern immigrants to America.
North and south together are now Italy, which has made great contributions to the world and provided millions of immigrants to the United States. As with other nations, those who emigrated were generally folks who suffered economic or political hardship and were looking for a better life.  Regarding Italy, most of its émigrés were from the ‘Mezzogiorno’, and most of those were from the island of Sicily: often peasant farmers, day laborers, and sulfur miners, some with skills such as stonemasonry, carpentry, or shoemaking.
The differences between north and south have been largely subsumed in America’s great melting-pot, and those of northern and southern heritage alike celebrate their Italian ancestry. But the distinctions are important to genealogists, because 18th, 19th and early 20th century records of births, baptisms, marriages and deaths on mainland Italy differ, in availability and type, from those of Sicily.  Northern Italian records are more variable from region to region because of the varied historical political systems of their locales, and have been more subject to loss or damage by war or natural causes.  Northern civil records were instituted in many states as early as 1809. They were started later on the island of Sicily, about 1820, but because of Sicily’s insularity, its records are more uniform and more available. Differences between the records of north and south can be important, depending on your ancestors’ origins.
The Mormon Church has collected microfilm copies of civil birth, marriage and death records, as well as local church baptism, confirmation, marriage and death records, from hundreds of towns in Sicily and Italy. These are available for rental and viewing at local Mormon FamilySearch Centers. Before we know where to look, and what to look for, research must be done using records made in the U.S., concerning our ancestors. And before searching American records, we need to follow some basic principles that I’ll begin to address next time.
Coniglio is the author of the book The Lady of the Wheel, inspired by his Sicilian research. Order the paperback or the Kindle version at "http://amzn.to/racalmuto"
Coniglio’s web page at http://bit.ly/AFCGen has helpul hints on genealogic research.  If you have genealogy questions, or would like him to lecture to your club or group, e-mail him at "genealogytips@aol.com."