Recently we advertised a lecture at the Morbid Anatomy Library (543 Union St., Brooklyn, NY) by Dr. Paul Koudounaris entitled “Sicilian Sex Ghosts.” The December 11th event appeared related to Southern Italian folklore and the Cult of the Dead, so we thought it might be of interest to some of our readers.

Then on Dec. 4, 2012, in an interview with brooklynpaper.com, Dr. Koudounaris was quoted as saying that everything in Sicilian society was “permeated with sex and violence” and that the stories he retells were a reflection of that. This upset some people, even though from the context it wasn’t clear if he meant now or centuries ago. The ghost story that was mentioned before the quote was used as a warning against certain sexual acts, so my first thought after reading it was that if sexual repression is considered as obsessive as sexual glorification then you could say that about almost any ethnic or demographic group. Since I was planning on attending the lecture anyway, I wanted to meet the speaker in person to hear what he had to say.

The venue was interesting; I'd never been to the Morbid Anatomy Library before. The room filled and soon it was standing room only. I watched and listened to Dr. Koudounaris as he interacted with others before the event and did not get the impression that he was a particularly bad fellow. I can't remember his exact words, but early on he stated that the Sicilians were a passionate people and that this was reflected in their culture and legends. When put that way it didn't sound hostile or nasty in any way. Dr. Koudounaris was eccentric but easy going. He wasn't exactly politically correct, which was fine with me, but he wasn't looking to offend anyone either. Satisfied with this, I gave him the benefit of the doubt and relaxed and enjoyed the lecture.

What drew me there in the first place was that the stories were focused on the remains in the crypt of the Monastery of Santa Maria Della Pace in Palermo, Sicily. I had previously written about the Neapolitan Cult of the Dead, and know that their ideas and practices are more widespread. I thought it possible that, through the lecture, I might find out more about Sicilian variations of that practice. What I found was indeed related, but came from a different direction. Dr. Koudounaris' PhD is in Art History (UCLA), and this needs to be remembered if you acquire a copy of his book Empire of Death: A Cultural History of Ossuaries and Charnel Houses, which contains his photographs from similar locations around the world. It is very good and was created from an artist's perspective, not solely a spiritual or anthropological one. His lecture included a slideshow of some of his photos; they were excellent.

At the beginning of the lecture Dr. Koudounaris stated that the Sicilians do not call them "sex ghosts," that is just a term that he uses for them. There are other ghost stories in Sicily but for his lecture he focused mostly on those with a sexual nature that were connected to the remains. It's actually a good thing that he stated they were sex ghosts because the stories were very descriptive and not entirely suitable for all audiences. However, they were very entertaining and I could imagine hearing them from the Sicilians that he heard them from, in language that was casual and spoken among friends. I would not have invited my mother, but if she were there she probably would have found it amusing, and laughed at my discomfort over her presence. 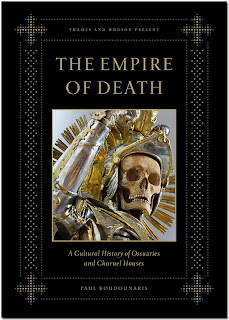 In the stories I could see some of the parallels to the way Southern Italians have culturally viewed and cared for the dead. The themes of retribution, bargaining and family bonds are evident. In one story the wayward ghost's widow was enlisted to control him, because he wouldn't listen to anyone else. I will not recite the stories because they would be difficult to verify, especially on short notice, and because I feel that Dr. Koudounaris has put in the time and effort to gather them from Sicily, so he should be the one to tell them.

A question and answer period followed the lecture and was interesting in its own right. Someone asked him about the position of the Catholic Church in connection to the stories, which described a rather strange exorcism, and I got the impression they might be fishing for something negative. Dr. Koudounaris replied that the Church does not officially promote the regional differences in worship or practices concerning the dead, but sometimes goes along with it to appease the faith of the locals. His answer seemed to reflect my own research pretty well, although there are occasional pushes to conform the flock that are usually resisted or ignored.

Dr. Koudounaris has traveled the world to gather material for his book Empire of Death, so he must have come across more than a few stories about his chosen topic. I brought this up and asked why he chose Sicily for his lecture. His response was the abundance of material. I'm not sure if it was because Sicilians had more stories or because they were more willing to talk about them.

Food and drink were available after the lecture and the people were friendly and interesting, but we had little time to linger. Overall I was happy with the way the evening turned out. Every culture has darker aspects, so while his stories were not for the squeamish I would still welcome the opportunity to hear more of them.