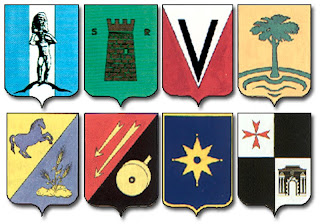 Banners of the various rione of Palo del Colle

A "Palio" is a competition between different neighborhoods of a town often commemorating an historical event. The competition can involve horse racing, jousting, or archery with the competitors dressed in the attire of the Middle Ages. The Palio of Siena is the most well known and publicized. These events, however, take place throughout Italy. The Palio del Viccio of Palo del Colle developed into the present form in the fifteenth century.

In Italian Palio means banner or racing silk. The various neighborhoods of a town each have their own colorful and symbolic banner. In Palo del Colle there are ten rione, or districts represented. Each rione would select a horseman to participate. The participants carry long poles while standing on horseback and attempt to pierce a leather bag of water suspended high in the air over the street. A plump turkey called viccio in the local dialect was the original prize.

The Palio del Viccio presently takes place twice a year. The winter event takes place on the last day of Carnival, or Fat Tuesday, which is the day before Ash Wednesday in February. The summer event is held on the last Sunday in July and is a recent addition to attract tourists.

The original object of the race was a suspended live rooster which the horsemen had to decapitate in order to win. This may seem a bit gory to our modern sensibilities; the reason why a water bag has been substituted. This tradition is very ancient however, and has its roots in our agrarian past. Our forefathers saw everything in the natural world as imbued with a spirit, a living entity which had to be dealt with in order to survive. The rooster represented the spirit of the grain. It was sacrificed in order to insure a plentiful harvest after the planting which took place soon after the season of the present Palio. Over time the sacrifice of the rooster was allied with the importance of horse raising for military defense, and the turkey was substituted for the rooster after it was introduced from the New World.