The late philosopher and novelist Ayn Rand defined art as “…a selective recreation of reality according to an artist’s metaphysical value-judgments.” Since early modern humans first appeared in Europe approx. 40,000 years ago, mankind has “selectively recreated reality” in numerous ways for many different purposes.

Many early civilizations, like Ancient Egypt and Minoan Crete, produced artworks (now mostly in museums) which continue to amaze people to this day. Each culture developed their own style of art.

It was the Greeks of the Hellenic Age, however, who were the first to venerate the human body and to develop the skills necessary to correctly recreate the human form down to minute detail. The Greeks, like the Romans after them, were especially fond of venerating the female human form. Perhaps no artwork better exemplified this than the famous statue “Aphrodite of Cnidus” by Praxiteles. After the fall of Rome, this veneration would not be seen again in Western art until the Age of the Renaissance.

The beginning of the 20th century saw the birth of film as both an art form and an industry, and with it the rise in popularity of what has been termed the “sex symbol.” The century saw a plethora of men and women labeled sex symbols, but only a few, such as Lillian Russell, Rita Hayworth & Marilyn Monroe, who could truly be considered icons. This article is a labor of love to one who is not only counted among the “greats,” but who rose above them to become a true symbol of feminine beauty – Sophia Loren.

Sofia Villani Scicolone was born in Rome, Italy on September 20, 1934. Her parents, both Campanians, never married, and her father left the family shortly after her birth (nice guy), forcing her mother to take Sofia and her sister Maria to Puzzuoli, a town outside Naples to live with Sofia’s grandmother. At the outbreak of WW2, the family moved to Naples.

Growing up in the slums of Naples, Sofia (by her own admission) was a tall, skinny tomboy who liked playing sports in the streets with neighborhood children, who nicknamed her “Stechetto” (lit: “Stick”). The coming of puberty saw her begin to blossom into young womanhood, however, and at the age of 14 she entered a beauty contest, making it to the finals.

At the age of 15 she entered another beauty contest where she met her future husband Carlo Ponti (who was one of the judges and 24 years her senior). Her first movie role was as an extra in the movie Quo Vadis which launched her career as an actress. It was around this time she changed her name to Sophia Loren. She married Ponti at the age of 21 and they had two sons: Carlo Jr. & Edoardo.

Her fame as an actress took off beginning in the late 1950s with roles in such films as Desire Under the Elms, Houseboat and Vittorio De Sica’s Two Women (arguably her greatest performance). She won her only Academy Award for this last performance. Her career as an actress reached its height in the film The Decline of the Roman Empire.

In addition to acting, she recorded over 24 songs during her career, including a gold album. By the 1960s she was an internationally celebrated beauty on par with the legendary Marilyn Monroe. She was actively courted by actors Cary Grant and Peter Sellers, both of whom expressed a desire to marry her. Though she rebuffed their proposals, she remained close friends with them for the remainder of their lives.

Later in her life she successfully lent her name to lines of products such as perfume, eyewear and jewelry. She even wrote her own cookbooks. Known for her sharp wit as well as her beauty, she once famously said of herself:


“Everything you see I owe to spaghetti.” 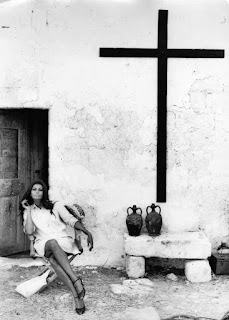 In 1991 the Academy for Motion Picture Arts and Sciences presented her its Honorary Award for her contributions to world cinema and proclaimed her “one of the world cinema’s treasures.” In 1995 she was presented with the Golden Globe Cecil B. De Mille Award. In 1999 in a nationwide poll conducted by UK beauty company Beautiko of thousands of Brits between the ages of 20 to 40, she was voted the “most beautiful woman in the world.” Her photo was then sealed in the Millennium Vault, Europe’s largest time capsule, to be opened in the year 3000.

In perhaps one of the greatest (and fitting when you think about it) of ironic twists, a woman who clearly shows her Southern Italian origin on her face (and wears it with pride) is universally considered the living symbol (and greatest beauty) of a country that has done little for her people since the infamous Risorgimento. I need say no more.


“I never saw so much woman come at me in my entire life!” – actor William Holden (reminiscing about his first encounter with La Loren).

“She is so sensual that most men must have a mad desire to tear off her clothes. However, they do not even dare to take her hand because she looks so distinguished, natural and discreet.” – actor Cary Grant.