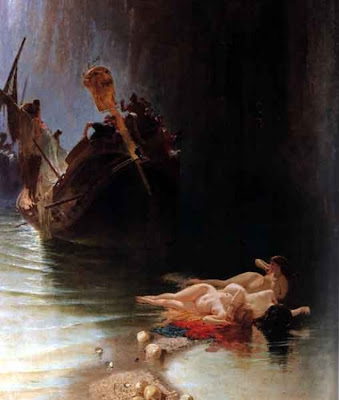 The city of Naples’ origins are rooted in the myth of the Siren Parthenope ("virgin"). According to legend, her failure to seduce the hero Odysseus and his shipmates as they sailed passed the Sorrento peninsula drove the jilted temptress to suicide. Her body washed up on the shore of nearby Megaride, a tiny island in the Bay of Naples. The locals respectfully interred her remains in Mount Echia, now the hill of Pizzofalcone.

The Sirens, it is said, were three sisters, Ligeia ("bright voiced"), Leucosia ("white goddess") and Parthenope. They were the offspring of the river deity Achelous and companions of Persephone, daughter of the goddess Demeter. When Hades, lord of the underworld, abducted Persephone Demeter transformed the maidens into winged creatures, half bird and half human, to help search for her missing daughter.

In other tales, they unwisely challenged the Muses to a singing contest and lost. To punish the sisters the Muses plucked out their feathers and wore them as headdresses to remind them of their impudence. Bitter, the Sirens haunted the coastal regions of Campania, luring passing sailors to their destruction with their irresistible song. Later, they were portrayed as mermaids. 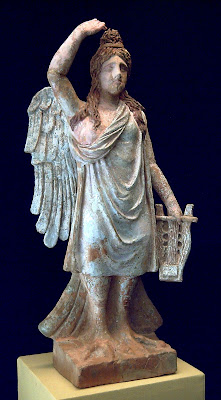 As early as the ninth century BC (almost 3,000 years ago) Greeks from Rhodes or Cumae settled the area and founded the town of Parthenope in her honor. The colony prospered and eventually merged with nearby Neapolis (New City). The metropolis grew into one of the more important settlements in Magna Graecia (Greater Greece), known today as Napoli. To this day many Neapolitans proudly refer to themselves as Parthenopeans.