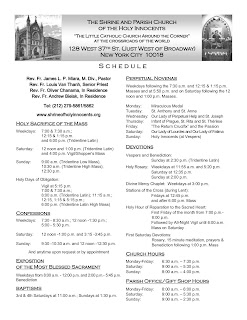 O holy Saint Anthony, pray for healing for my spouse and/or other dear family members who are suffering:

O glorious Saint! Thou didst escape from the dangers and temptations of the world by disdaining greatness, riches and the comforts of life, and by joining the Canons Regular of St. Augustine; we beseech thee, obtain for us detachment of the heart and a true contempt for the world.

Our Father, Hail Mary, Glory Be

St. Anthony, glory of the Order of Friars Minor,
pray for us who have recourse to Thee that we may be made worthy of the promises of Christ!

NATIVITY OF ST. JOHN THE BAPTIST

- June 24th AN UNHEARD OF GRACE

Whenever in the scriptures a name is imposed, or changed for people, by God, it is indicative of great praise and virtue. It was good that our Redeemer’s precursor was ordered to be called John. The name John means “the grace of the Lord,” or “in whom there is grace.” He received a special grace beyond other saints, that of being Christ’s precursor, and he came to proclaim a heretofore unheard of grace to the world, that of entry into heaven. Therefore he who was full of grace himself, and who brought the good news of God’s grace to the rest of mankind, expressed even by his name a proclamation of grace. It was rightly foretold that there was to be cause for exultation for many at his birth, since it was through him that the Author of their regeneration was manifested to the world.

We should note that there was the same proclamation of praise for John by the angels as that declared by the evangelist for his parents. It was testified that they were just before God, and that John was great in the sight of the Lord. How great he was in the sight of the Lord, the Lord Himself suggested, since He alone granted him the virtue of his greatness and knew of it as well, saying, “Among those born of women there has risen none greater than John the Baptist” (Matt 11:11). -- St. Bede the Venerable, Homily 11.19

FEAST OF OUR LADY, QUEEN OF PEACE

- June 25th 40th Anniversary of the Apparitions at Medjugorje
"Dear children! Once again I am with you today to tell you: Little children, whoever prays does not fear the future and does not lose hope. You are chosen to carry joy and peace, because you are mine. I have come here with the name 'Queen of Peace' because the devil wants worry and war, he wants to fill your heart with fear of the future - but the future is God's. That is why, be humble and pray, and surrender everything into the hands of the Most High who created you. Thank you for having responded to my call." -- March 25, 2021 message to the visionary Marija Pavlovic

Devotions to the Sacred Heart of Jesus consisting of the chanting of the Litany in Latin with the Act of Consecration will take place each Sunday of June during Benediction following the 2:30 p.m. Vespers.