A Look at “The Pope’s Legion: The Multinational Fighting Force that Defended the Vatican” by Charles A. Coulombe 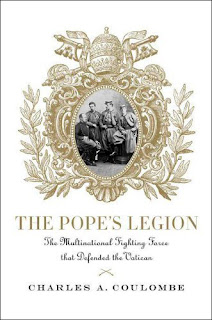 I recently purchased a few books that I’ve been meaning to read and among them was noted Catholic historian Charles A. Coulombe’s The Pope’s Legion: The Multinational Fighting Force that Defended the Vatican. Published by Palgrave Macmillan in 2008, the 260-page book offers readers a sagacious overview of the violence and machinations of the Risorgimento and the men who came to the Holy See’s defense.
In short, the Pope’s Legion were the Pontifical Zouaves, an elite fighting force made up of Roman Catholic volunteers sworn to defend Blessed Pope Pius IX and the Papal States from the conspiring and belligerent agents of Italian unification (Cavour, Mazzini, Garibaldi, et al.). With great care and sympathy, Mr. Coulombe masterly tells their story, from their founding in French Algeria, to their emotional dissolution in France, and later revival under Prince Alfonso Carlos of Bourbon during the Third Carlist War (1872-1876) in Spain.
While the book primarily deals with the Italian (i.e. Piedmontese) subjugation of the Papal States, it also provides us with a better picture of what correspondingly took place in southern Italy during unification. For example, after the capitulation of the Eternal City, Mr. Coulombe recounts how “the new authorities—ever mindful of propaganda [were] already preparing for one of their customary rigged plebiscites,” (p.171) calling to mind the sham referendums already carried out in 1860 by Garibaldi in Naples and Palermo to ratify the earlier conquest.
Bereft of the usual romantic and fanciful agitprop relating to Garibaldi and company, The Pope's Legion is a welcome candid account of the Risorgimento, where the likes of Victor Emmanuel II and the revolutionary Garibaldini are starkly juxtaposed with Pius IX and his knightly Zouaves.

Although the Holy See was only too aware that Sardinian ships, money, men, and arms were at the moment assisting Garibaldi in conquering Naples, the Pope was less than reassured. Indeed, in May, when Garibaldi began his attack on Naples, he had sent a trusted lieutenant, Zambianchi (known as the “priest slaughterer” for his ordering the massacre of clergy at San Callisto during the 1848 Roman Republic) to start the revolution in the Papal States. (p.65-66)

More than just fighters, the Zouaves also performed humanitarian relief; as in August 1867 when a virulent cholera outbreak struck the beautiful Roman lakeside town of Albano.

Pius IX ordered in the 6th Company of the 2nd Battalion of the Zouaves. Upon their arrival, the Pope’s soldiers immediately began their work. Some were assigned to dig graves in the cemetery, where, the first night, ninety corpses were brought to them. The remaining spent their time finding and nursing the sick—feeding them, caring for them, and seeing that the dying received the sacraments. (p.120)

It should be noted, as the Mayor and city council cravenly fled Albano and the “bodies piled up in the streets or rotted in houses,” the exiled royal family of Naples and archbishop Cardinal Altieri selflessly “took their places beside the Sisters of Charity.” (p.119-120)

In the stifling heat, with the odor of death and excrement all round, it must have seemed like a chamber of hell. Cardinal Altieri, the Queen Mother of Naples, and her youngest son, Don Gennaro, caught the disease and died, as did two Dutch Zouaves. One of these, Henri Peters, spent his final hours clutching and kissing a crucifix, his last words being "I know Heaven is before me when all this is past.” (p.120)

Also included is an informative appendices, complete with songs, sites and transcript of Msgr. Ignacio Barreiro-Carambula’s sermon delivered at the memorial Mass for the Pope’s Soldiers on September 20, 2017 at the Church of Corpus Domini in Rome.
From the Neobourbon perspective, one cannot help but be inspired by the Zouaves loyalty and heroism. Counted among the great counter-revolutionaries of yore, these courageous warriors join the immortal ranks of Cardinal Ruffo’s Sanfedisti, the Royalist of the Vendée, the Carlists of Spain, and others. For us, they embody the heroic spirit of the Catholic crusader and deserve to be remembered and honored like our ancestors who bravely fought for King and country on the banks of the Volturno and at Gaeta; who stubbornly held out against all odds at Civitella del Toronto in Abruzzo; and who took to the hills and refused to surrender, even after the Royal Family were deposed and their homeland annexed by Piedmont.
Insightful, well-researched and entertaining, I highly recommend The Pope’s Legion.
A prolific writer and speaker, Mr. Coulombe also co-hosts (with Vincent Frankini of Tumblar House) a highly entertaining weekly question and answer show called Off the Menu, which explores a myriad of topics from a traditional Catholic and Monarchist point of view.
* The Pope’s Legion: The Multinational Fighting Force that Defended the Vatican, Charles A. Coulombe, Palgrave Macmillan, 2008, p.221