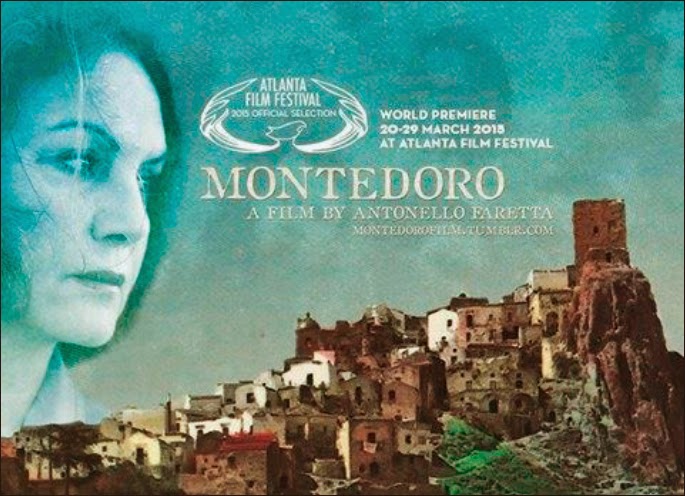 Reprinted from the March 2015 Craco Society Bulletin
“Montedoro” the film will be making its World Premiere at the Atlanta Film Festival on Saturday March 28th.
After years of hard work by film maker Antonello Faretta and a dedicated team from Noeltan Film Studio, the film that was shot in Craco Vecchio was recognized as an Official Selection in the Atlanta, GA event.

Held from March 20-29th the Atlanta Film Festival is an Academy Award qualifying, international film festival. Started in 1976 and occurring every Spring, the festival shows a diverse range of independent films, including genre films such as horror and sci-fi.
The Festival added "Montedoro" to the 17 other films selected in the Narrative and Documentary Feature Competition categories.
The event is being held at the historic Plaza Theatre, a local Atlanta landmark since 1939.
Faretta’s other works have been featured in international film festivals, art galleries and museums through-out the world like Centre Pompidou, Museum of Contemporary Art Barcelona, Cannes Film Festival, Galerie du Jour Agnes B., Rotterdam Film Festival, Hot Docs Toronto and Pen World Voices Festival New York.
“Montedoro” is his first feature film and includes a cast of Pia Marie Mann, Joe Capalbo, Caterina Pontrandolfo, Luciana Paolicelli, Domenico Brancale, Anna Di Dio, Mario Duca, Aurelio Donato Giordano, Joan Maxim and the Craco inhabitants. Production was done by Faretta, Executive Producer, Adriana Bruno, Pia Marie Mann and Noeltan Srl. The film is in Italian and Cracotan dialect with English subtitles.
The Society was able to provide archival film and images members provided that were used in the production and are recognized in the film credits.
After all the hard work and effort that went into creating the film we are glad to see Antonello Faretta, the producer, and Society member Pia Marie Mann, who is the star get the recognition they deserve.
You can follow developments for “Montedoro” on Facebook, Twitter, and on Tumblr.
We look forward to hearing of their great success at this prestigious event and wish them,
“In bocca al lupo!” — THE BEST OF LUCK!