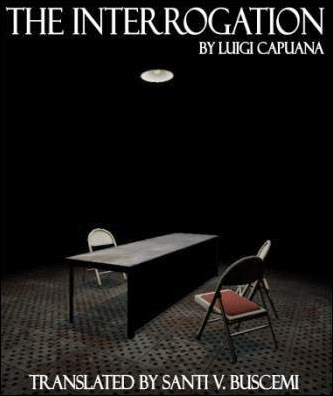 You are cordially invited to attend a reading of Luigi Capuana's, "The Interrogation" at the Italian American Museum on Thursday, April 17, 2014.  The Interrogation is a two character play originally written in Sicilian and translated to English by Santi Buscemi.
About the play:
The Interrogation (‘Ntrrugatoriu) is a play in one scene with two speaking parts.  A murder suspect speaks Sicilian while his interrogator, a magistrate from the north (Piemonte or Lombardia, Capuana suggests), speaks Tuscan. This creates a linguistic contrast that underscores the alienation of the southern poor (the accused is a barber) in a state ruled by the arrogant northern bureaucracy of nineteenth-century Italy. The magistrate speaks in a cerebral, formal, and distant voice, while the accused is passionate and engaging, if not always honest. As such, Capuana is able to address differences in class, and he critiques the political reality under which the people of the Mezzogiorno suffered. But the dialogue in this exciting, suspense-filled play goes beyond politics. Capuana believed that our fate was determined largely by forces outside our control: the environment, economics, and our animal biology. An expert at exposing human motives found at the lowest depths of the psyche, he wrote several works that remain masterpieces of psychological and emotional intrigue. The Interrogation, which focuses on a man driven to violence by passion, hubris, and jealousy, is one of them.
The Readers:
Santi Buscemi teaches English at Middlesex County College in Edison, NJ. He has published seven textbooks and online learning tools for McGraw-Hill Higher Education.
The son of immigrants from Agrigento, Sicily, Buscemi has translated Luigi Capuana’s C’era Una Volta (published as Sicilian Tales) and The Marchese of Roccaverdina, the writer’s capolavoro. Both were published by Dante University of America Press.
He has also published a translation of The Interrogation, one of Capuana’s Sicilian plays, in the Journal of Italian Translation. In 2012, the play was presented as a dramatic reading at the Italian-American Writers Association in New York City. Other works include “A Vision of Sicily” in Primo magazine, “Meeting Antonin Scalia” in The Times of Sicily.com, and several translations of Capuana’s fairy tales in Italica, the Journal of Italian Translation, and Forum Italicum. He recently completed an online course, The Literature of Sicily: A History, for Dante University of America Press.
Prof. Buscemi has lectured on Sicilian literature and architecture for the Italian-American Heritage Club of Hunterdon County and Dorothea’s House in Princeton, a version of which appears on YouTube. He has also presented scholarly papers on writing, literature, and translation, including one at the University of Natal in South Africa. He is in the process of translating Profili di donne by Capuana and I Vicerè (The Viceroys), a novel by Frederico De Roberto, who with Capuana and Verga, was one of the Sicilian veristi.
William D’Arienzo is the founder and CEO of D’Arienzo Associates in Princeton, NJ, which helps start-up companies achieve their brand strategy objectives and business goals. He is also CEO of ApparelAnalytics, an online consumer research service.
The son of immigrants from Avellino, his education includes a PhD from the New School, and he has been a Ford Fellow and a NEH Fellow at Princeton University. He is an adjunct professor in business at Rider University in Lawrenceville, NJ, and he founded and manages the Brand Management program at FIT in New York. In 2010, he published By George! Lessons in Leadership from George Washington, CEO and has just completed a textbook entitled The Business of Brand Management.
Dr. D’Arienzo has presented lectures and workshops for members of the wholesale and retail fashion community, and he has designed and led seminars for Ting executives from China and Japan. He has also lectured in Spain, Central America, and India. Last year he spent a month as a visiting university lecturer in China.
Thursday, April 17, 6:30PM
Italian American Museum
155 Mulberry Street, New York, NY 10013
Suggested donation of $10
PLEASE RESERVE EARLY
To reserve a place for this event, please call the Italian American Museum at (212) 965-9000 or email: ItalianAmericanMuseum@gmail.com